The Mark A. Chapman Theatre was filled with music and movement this weekend with the Kansas State Dance Program presenting its WinterDance 2017 performance Nov. 30, Dec. 1 and Dec. 2.

Each of the show’s nine dances were unique in both theme and style of movement. Rehearsals began the second week of the semester.

One dance, titled “In the Night,” was inspired by this year’s common read, “The Curious Incident of the Dog in the Night-Time” by Mark Haddon. Fifteen dancers performed a narrative focused on labels and how they affect people.

“The ‘In the Night’ piece was something that was different for me, collaborating with my freshman students this year,” said Julie Pentz, choreographer and associate professor in the School of Music, Theatre and Dance.

Other dances in the performance were inspired by concepts like motion and West African culture.

Another dance called “Routine Days” included a comedy sketch about a clown-nosed bus driver trying to find love with the help of a magical box, drawing rounds of laughter from the audience.

“It was very comedic, and I don’t remember seeing anything like this before,” Kevin Stilley, an audience member, said.

Performers in the dance titled “With Eyes Closed (What Noise Becomes)” moved in time with the sounds of clanging metal and the hum of a train engine. Audience member Samson Studheit described this dance as “otherworldly and surreal.”

“I loved all the pieces,” Pentz said. “They were all so different.”

“I’ve been doing dance since I was three years old — started really young,” Manguel said. “I did WinterDance last year, and I had to come back. It was a really fun experience.” 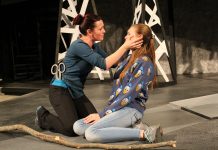 “Into the Woods” opens this weekend in Chapman Theatre 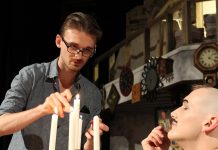 Actors “burn down” newly renovated Chapman stage in “The Arsonists” 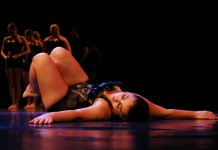