Imagine opening up your kitchen cabinets to find only a half-eaten jar of peanut butter, a box of white rice and three packages of instant noodles. This is not your breakfast menu by choice; you just don’t have the dough for the abundant, nutritious groceries that your body needs.

You are facing a situation called food insecurity, in which other bills need to take precedence over your shopping list because those bills such as housing, medical and transportation costs going unpaid would result in something far worse than a growling stomach. And ramen for breakfast one more day can’t be too bad, right?

About least one in six Kansas households (16.5 percent) faced this problem in 2013, according to a 2015 report on food insecurity in Kansas, published by the Kansas Health Institute. Researchers also found that one in five households with children were food insecure.

Food insecurity’s ramifications are often invisible to those who are unaffected by it, so it is hard to know how many are truly affected. But this report has quantified it through census data, finding more than 183,000 Kansas households — equaling close to 450,000 Kansans — experience this issue.

The most recent census data, from July of 2016, shows Riley County has a poverty rate of 18.5, which is higher than all its surrounding counties and more than six percent higher than the statewide average of 12.1 percent.

However, there are resources for Manhattanites who need extra help accessing good food. The longstanding operation of the Flint Hills Breadbasket and the new nonperishable food pantry for students, Cats’ Cupboard, are two great assets.

Kieffer began working with the Flint Hills Breadbasket, which was founded in 1983, six years ago. She oversees the daily operations of the Manhattan food pantry.

The Breadbasket is entirely donation-based and does not receive any federal, state, county or city dollars.

“It runs on donations, grants and foundations,” Kieffer said. “There are grants down at the Greater Manhattan Community Foundation … and from great businesses that believe in what we do here.”

Big name retailers and “a whole array” of other businesses help to fund and donate to the Breadbasket, though Kieffer did not want to include specific names so as to not exclude any.

“Every morning we have a truck that goes west and a truck that goes east, and their routes are around town,” Kieffer said. “These volunteers … go to Walmart, Target, Chipotle, Longhorn, there’s a lot of places that are on our route. …They collect the food on those routes and they bring it back.”

She said there are other volunteers who then help to organize and properly store the food. Cold food products go to the cooler or freezer right away along with inspected produce, and nonperishables are sorted and shipped to five partnering churches.

“We give out what we call ‘front room food.’ That’s produce and breads and sweets and things out of the freezer,” Kieffer said. “[Visitors] come here [905 Yuma St.] in the mornings to collect that after they qualify, and in the afternoon they get a voucher to go to the church, and that’s where they get all their staples.”

Staple groceries include the nonperishable foods that fill cabinets such as pasta, macaroni and cheese and canned vegetables.

Kieffer said there are three employees at the Breadbasket and volunteers are vital to their process.

“In 2016 we had 8,323 [volunteer] hours booked, but that doesn’t count people doing fundraisers for us through their businesses,” she said. “It’s gotta be so much more [in reality]. Right now, I have three pages of people that are doing fundraising for us at their businesses. They’ll call and see what our needs are at that time and they’ll try to get their employees involved, and these hours don’t count any of those outside activities.”

Those interested can find additional information such as how to qualify and the distribution times of the churches by visiting the Breadbasket website or by contacting the organization.

A new initiative to feed Wildcats

Food insecurity can hit college students hard. In the Campus Climate Assessment Project of 2015, conducted by the Kansas State Office of Student Life, 48 percent, or 2,325 students, of respondents reported financial hardship. And 39.4 percent of those students, totaling 917, indicated a difficulty affording food.

The Office of Student Life also did a financial stress study that found 14 percent of student respondents said they did not have money for basic needs. It also found 51 percent did not have grocery money at least on one occasion in the three months before the survey.

“That survey actually found that students were skipping meals,” said Sarah Barrett, director of Cats’ Cupboard who, with two colleagues, administered the survey. “Students were not having enough money to meet their basic needs and were kind of at a financial breaking point. That’s when I took the lead on this group that put the pantry together, because for me, I had actually faced food insecurity as a student. I was from a low-income family and paid for college myself, so I knew what that was like.”

“This project has been probably about four years in the making,” Barrett said. “Many different folks around campus had different efforts going on trying to get closer to something like a centralized pantry. The College of Education had their pantry, but it was only open to education students. The School of Leadership Studies had mobile food distributions and other things going on to address food insecurity.”

Barrett said back in 2014 she worked as the assistant dean in student life, so she “had many students coming in, and oftentimes they would say that they had something going on academically, and then also financially or related to food insecurity.”

The Cats’ Cupboard is in full operation on the K-State campus, being accessed 300 times since opening in late October in the basement of Fairchild Hall, room 009. Around 50 percent of those visiting are repeat customers. Mark Woolard, graduate assistant and employee of Cats’ Cupboard, said the pantry “used to exist in a hall closet” in Holton Hall.

Woolard, who heads social media outreach at Cats’ Cupboard, said it is run by just one other employee and “a force” of 20 volunteers who monitor the door and sign-in sheets, do all the chalking and poster promotion and keep the shelves stocked with nonperishable food, cookware and hygiene products, which are offered for free to students.

The other employee, Erin Bishop, serves as the food pantry coordinator. She said the Cats’ Cupboard is “open to all students,” and is still in the process of “trying to get the word out.”

She said at least two people told her previous Collegian articles about the food pantry led them there.

There is no limit to how much food a student can take.

“People can make decisions about what they need in their life, like when you go to the store, and you decide what you need to stock your cupboards and what you want to eat,” Barrett said. “We let people do the same and make the same choice at the Cats’ Cupboard.”

This is the first holiday season for the young organization that has been open just over two months. Barret said last year when the program was merely “shelves that [she] was just kind of stocking” in the Office of Student Life, there was a “big uptick” in traffic right before Thanksgiving and during winter break.

During the university’s fall break this year, 12 people accessed the pantry, Bishop said.

“A lot of students that stay on campus or in the community are a lot of international students that may not necessarily be going out of town for Thanksgiving or winter break,” Barrett said.

Bishop said she is appreciative that Cats’ Cupboard was open for fall break.

Barrett encourages food insecure students to think of Cats’ Cupboard as a way to help them afford the nutritious food they would not otherwise be able to buy.

“It’s a supplement — that’s what I’ve been trying to tell people — just like you supplement your academics and you go to tutoring because you want to be the best student you can, you can supplement your groceries and maybe spend more money on perishables or vegetables,” Barrett said.

The Cats’ Cupboard is open Sunday through Friday. The hours of operation can be found on their webpage. 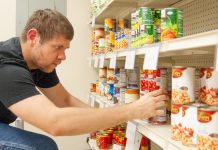 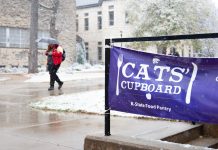 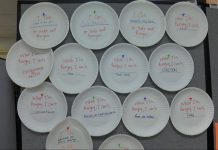