The Kansas State football team will travel to Phoenix to take on the University of California, Los Angeles in the Cactus Bowl on Dec. 26. The game between the Wildcats and the Bruins will be played at Chase Field, where the Arizona Diamondbacks play baseball in the MLB.

The last time K-State played in a multi-purpose football-baseball stadium was in its 28-24 victory against the University of Miami on Sept. 24, 2011 in Sun Life Stadium. That game ended on a goal line stand, where linebacker Arthur Brown made a game-saving fourth down tackle just short of the goal line.

The obvious storyline for the Cactus Bowl is UCLA quarterback Josh Rosen and the nation’s fifth-ranked passing offense versus K-State’s passing defense, ranked 128th out of 129 Football Bowl Subdivision teams.

However, K-State has shown that it can beat teams that throw the ball well. Oklahoma State, a team that K-State beat two games ago, has the best passing offense in the country. Other teams that lost to K-State do not fare much better in passing offense: Texas Tech sits at 11th, Baylor is tied for 24th and Iowa State ranks 32nd.

This will surely be an interesting matchup based on passing alone, but there is something even more interesting: K-State’s rushing game.

The Wildcats average the 42nd most rushing yards per game at 186, while UCLA gives up an average of 282 rushing yards for 128th in the country.

The really exciting part of this matchup will be the possible return of the quarterback run game to the K-State offense.

Freshman quarterback Skylar Thompson will almost definitely get the starting position — he’s earned it — but I wouldn’t be surprised if sophomore quarterback Alex Delton was available to play.

Adding another rushing threat should open up the field for K-State’s running backs and give Thompson some better chances for throwing the football.

The UCLA defense plays a base 4-3 defense — four defensive linemen and three linebackers — instead of the base dime defense that is becoming popular in the Big 12.

The major weakness in UCLA’s defense (and the reason they give up so many rushing yards) is that their linebackers struggle to crash down on the run.

Wildcat junior offensive guards Abdul Beechem and Tyler Mitchell should have success getting downfield and blocking the Bruins linebackers.

Offensively, UCLA’s interim head coach Jedd Fisch likes to throw the football. They do not huddle very often and like to throw short passes and screens.

Rosen was knocked out of the final game of the regular season against the University of California, Berkeley in the second quarter. The injury kept Rosen from breaking UCLA’s single-season passing yards record, but he should return for the Cactus Bowl.

The Bruins’ season record is 0-6 away from their home stadium, the Rose Bowl, and 6-6 overall. Rosen has struggled on the road as well. His road touchdown-to-interception ratio is an abysmal 26-18.

Fisch is on his way out, but he will coach the bowl game despite the recent hiring of Chip Kelly at UCLA. This will likely be Fisch’s last game at UCLA. He is 1-0 as interim head coach.

Ultimately, I think both teams will do what they do best on offense. It will come down to the weak side of the offenses: passing for K-State and rushing for UCLA. K-State, true to form, will come out flat to start the game, but I predict Thompson will lead K-State to a 45-42 victory. 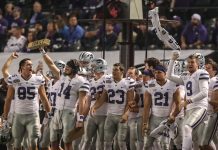 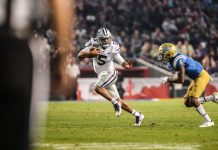 Know your opponent: University of Oklahoma