The Kansas State Wildcats have traveled out to Phoenix, Arizona, where they are prepared to take on the University of California, Los Angeles Bruins at 8 p.m. CT at Chase Field.

The Wildcats finished regular season on Nov. 25 against the Iowa State Cyclones, where they won 20-19. Their final record of the season was 7-5. The Cactus Bowl is K-State’s 21st postseason bowl appearance.

UCLA is not a new opponent for K-State.

When it comes to UCLA and K-State, the Wildcats are 1-2 against the Bruins. They have met a total of three times since 2009. The most recent time was the 2015 Alamo Bowl, where the Wildcats fell to UCLA 40-35.

K-State will be playing its 94th all-time game against current members of the Pac-12 Conference, but 66 of those game came against the University of Colorado Boulder when they were still in the Big 8/12.

The eight-year bowl streak that the Wildcats gave is tied for 13th nationally, with only the University of Oklahoma and Oklahoma State ranking higher in the Big 12. K-State is just one of the 16 FBS schools nationally tied to ride the stake of at least eight consecutive bowls.

After being with K-State since 2009, offensive coordinator Dana Dimel will be coaching his final K-State game. Dimel has taken a head coaching job over at University of Texas at El Paso. Even though Dimel’s path ahead is at UTEP, head coach Bill Snyder says he has remained heavily involved within the team.

When it came to whether or not he thinks his son and current junior fullback Winston Dimel would be playing his last game with the Wildcats, Snyder said, “I’d imagine it would be.”

UCLA quarterback Josh Rosen will be sitting out this game, thus increasing chances of a purple victory. Rosen has dealt with concussive symptoms throughout the season. It is also rumored that Rosen will not be in the NFL Draft this year, either.

D.J. Reed and Alex Delton have been out the past couple games for the Wildcats due to injury. However, Snyder said that both Reed and Delton are ready to go for the Cactus Bowl. Snyder also mentioned that Skylar Thompson will remain the first string quarterback for the Wildcats. Offensive lineman Dalton Risner will not be playing in this year’s bowl game due to injury.

Snyder talked about Thompson and his poise that he has shown both the entire season and in preparation for the bowl game.

“It’s about the same as I have seen for the last three or four weeks of the season,” Snyder said. “He’s just a young guy that maintains his poise, has an appropriate level of confidence about him. His execution is very consistent and has been consistently good. None of that has changed. I don’t see any difference in him than whenever we talked the last time.”

When it comes to practicing and getting ready for the bowl game, Snyder talked about the work ethic the team has showed.

“None come to mind right now,” Snyder said. “The early portion of our bowl preparation, as it is every year, is centered and focused around younger guys who normally don’t have the opportunity. We try to get them involved more readily and individual, fundamental technique drills. I thought there were a number of them I was pleased with their efforts, but as it relates to how they would impact the bowl and opportunities in the bowl game, that hasn’t changed. It will be the same team, same people.”

Snyder also talked about UCLA’s home successes, and how that might play a part in the bowl game.

“They get to claim this as a home game, so it’s going to be a home game for them, and they haven’t lost at home,” Snyder said. “Again, it all boils down if you do it the right way and have the discipline to keep the game between the white lines. That field down there is the same size as the one we’ve got here. It’s just a matter of staying disciplined and taking your preparation to the field and staying focused and keeping it between the white lines. If you do that then good things normally happen.”

When it comes to intimidation both on and off the field, Snyder talked about how that can affect players.

Sources have said that Snyder will be coming back for the 2018 season, however Snyder himself says he is still in the process of making that decision. Shortly after the press conference, athletic director Gene Taylor came to talk to the media, where he said he had been impressed with how active Snyder has been. According to Taylor, Snyder has not missed a single practice.

Taylor says he expects Snyder back for 2018.

The Wildcats arrived in Phoenix on Dec. 21 and were present at the Cactus Bowl media day, where Snyder again talked about the matchup and whether or not they were up for revenge after the Alamo Bowl loss.

“Well, we don’t play for revenge,” Snyder said. “For us it’s the old adage of 1-0, just a day at a time, a game at a time, and what happened in the past from any ballgame that we played is not really going to have an impact on this bowl game. Look at it that way.”

Snyder also talked about the meaning of the game and reflected on how the regular season ended and how he adjusted his coaching. 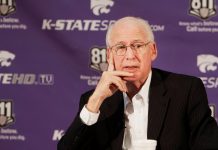 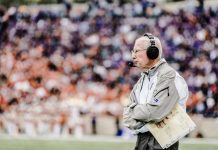 Kays & Kennedy encourage students to look at finals as a...