Kansas State’s cornerback and return specialist, D.J. Reed, will not be returning to K-State his senior season. Instead, Reed will be entering the NFL Draft.

The All-Big 12 player had 47 tackles, nine pass break-ups and four interceptions this past season, and led the Wildcats to multiple victories. The 5’9, 188 pound man was the all-conference return specialist, who averaged 34.2 yards on 17 kickoff returns.

At the Cactus Bowl, Reed got four tackles, which helped the Wildcats achieve an 8-5 record and a win over UCLA. 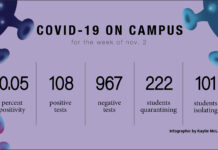