The Kansas State men’s basketball team will look to ride the momentum of a three-game winning streak when they host the University of Georgia this Saturday inside Bramlage Coliseum.

They are coming off a win at Baylor on Monday night in which junior guard Barry Brown and junior forward Dean Wade had the majority of the points.

Saturday could prove monumental in a future bid into the NCAA Tournament as both these teams are hovering around a buddle spot as the season inches closer to February. Of course, there is still a lot of time for either team to work their way into or out of the tournament in the next six weeks, but both teams will look for a non-conference win to bolster their resume.

Brown and Wade have looked like two of the best players in the conference over the past two weeks and will need to continue that effort if K-State wants to make a run at a conference title.

The Wildcats will host the University of Kansas on Monday with a share of the lead in the Big 12 on the line, if K-State wins.

These next three games will be tough though as K-State will take on Georgia, Kansas and then go to the University of West Virginia on Feb. 3.

But first, K-State must stay focused on the Bulldogs, who come into this game with a record of 12-7 overall and struggled in conference play at 3-5.

They come into this game losers of four of their last five games and are in need of a win with their lone win in that stretch coming against LSU 61-60.

K-State hopes the script goes the same as two years ago when then-freshman Wade hit a two point shot in the corner in the closing moments to take down the Bulldogs.

An important matchup to watch on Saturday will be the big guys; Georgia’s leading scorer, Yante Maten, averages almost 20 points per game and will be guarded by K-State sophomore forward Makol Mawien.

The Bulldogs don’t have anyone else who scored more than 10 points per game, so keeping Maten to a low point total could equal an easy win for the Wildcats inside the Octagon of Doom.

Georgia has one win over a top-25 team this season; they beat Saint Mary’s in the early part of the season, but conference play has not been friendly to the Bulldogs.

Tip off is set for 1 p.m. on Saturday, and the game can be seen on ESPNU. 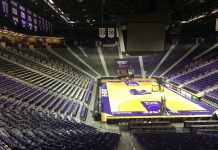 After the buzzer: Go behind the scenes at a Bramlage Coliseum cleanup 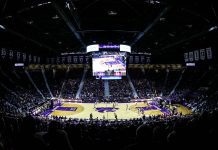 The Octagon of Doom: Inside the 30 years of Bramlage Coliseum’s history