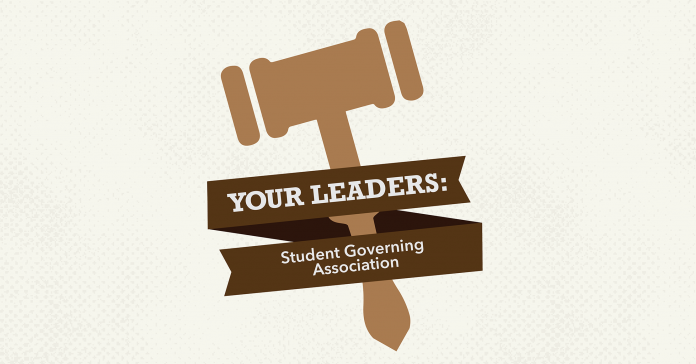 The Student Governing Association confirmed the appointment of the new attorney general as well as appointments to the Tuition and Fees Strategies Committee during their first meeting of the semester.

Peter Moyer, junior in political science and economics, will head SGA’s judicial branch as the new attorney general. Moyer was selected from a pool of eight applicants.

The senate also appointed several senators representing their respective colleges to the Tuition and Fees Strategies Committee. Jonathan Peuchen, speaker of the student senate and senior in mechanical engineering, said K-State Polytechnic declined to send a representative, as they said they are not subject to the tuition suggestions made by the committee.

Additionally, due to the resignation of Bryanna Wishcop as student senator for the Graduate School, Russell Harp, graduate student in counseling and student development, was nominated by the Graduate Student Council to occupy the vacant seat.

Nick Edwards, SGA athletics liaison and senior in marketing, presented a brief presentation on the history of the “F*** KU” chant and asked that senators both refrain from participating in the chant and discourage those around them who might participate during the game.

During final action, the senate granted a continuance of the KSDB Operations Privilege Fee

The senate also approved a bill to amend Chapter 27 of the SGA statutes to reflect changes in funding for the Student-Centered Tuition Enhancement Committee. The amendment also correctly re-identifies the Student Activities and Services office as the Center for Student Involvement.

Pat Bosco, vice president of student life, spoke about the importance of SGA and student representation at the end of the meeting. Bosco said he believed SGA at K-State “is unlike any other student government in America” because of its emphasis on true student involvement and the how K-State continues “passing the power onto a legitimate student government vehicle.”

During commendations, the K-State Crops Team was formally commended for their “excellence,” and SGA formally “appreciates the time and effort that students within the College of Agriculture put forth to show the value of their hard work in both academics and throughout their respective organizations at KSU.”

Earlier in the evening, representatives from each SGA branch hosted the first session of the Accelerated Fellowship Program.

Ryan Kelly, student senator and junior in civil engineering, said the event was designed to inform the general student body about the functions of SGA.

“We are just … looking at a really high-up overview of what Student Governing Association does,” Kelly said.

The goal in the coming weeks of the program, Kelly said, will be to give more in-depth explanations of what the executive, legislative and judicial branches do at SGA throughout the semester.