With the Kansas State men’s basketball team squaring up against Kansas at home tonight, the “F*** KU” chant has been a big focus of Sunflower Showdown.

In recent years, the K-State student section has chanted against KU at football and men’s basketball games, but students have also chanted it at games against other teams.

Here are some of the reactions K-State fans have had to recent attempts to stop the “F*** KU” chant, using the #StopTheChant hashtag on Twitter.

One user commented that though she does not like KU, the chant is not classy.

I love K-State. I hate KU. But I hate KU with class. #StopTheChant https://t.co/jt6e4krd4P

If you didn’t make the cut to be a @KStateClassyCat, there is another way to be a classy cat #StopTheChant pic.twitter.com/yTH52yelZn

The Black Student Union shared its stance on the chant as well, asking followers to show sportsmanship.

Students! Let’s rally together tomorrow and be sportsman like when we cheer on our K-State basketball team by NOT chanting “that specific chant” during the game. Join us in our efforts to #StopTheChant

One fan warned that the chant may not help the Wildcats on the court.

Another student brought up several reasons against “F*** KU.”

Today is also the state of Kansas’s birthday, and one user shared her Kansas Day wish: to #StopTheChant.

All I want for #KansasDay is for the KSTATE family to show all attending and watching the #SunFlowerShowdown that the #wildcatway is one of good character and fierce competition as the Cats win #StopTheChant pic.twitter.com/27EqkZBSpO

However, some people are asking for more “Sandstorm.”

And another user says “F*** KU” is not worth worrying about.

This #StopTheChant isn’t a big deal. Stop crying about this. There are more & better things that our university has to talk about which they haven’t yet. #KState

The Wildcats and the Jayhawks will face off in Bramlage Coliseum tonight at 8 p.m. Yesterday, the women’s basketball team beat KU 63-59 in overtime in Lawrence. 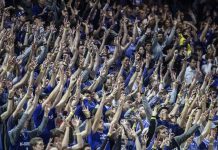 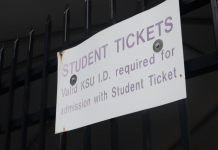