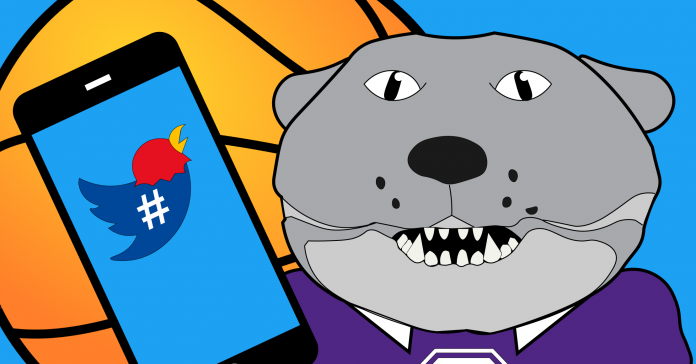 The anticipation for the second round of Sunflower Showdown 2018 brewed for weeks on social media, with tweets ranging from the now infamous “F*** KU” chant to the Cat’s winning streak. The first Sunflower Showdown this year had the Men’s Basketball team stacked against its in-state rivals at KU, losing by just one point in Allen Fieldhouse.

Since that overwhelming loss, K-State has been booming. The men’s team is currently coasting on a four-game winning streak, not to mention the women’s team beating KU Sunday in Lawrence. Both men’s teams were rebounding in the conference, with KU boasting top standings in the Big 12 and K-State trailing in fourth place.

K-State vs. KU, the stakes were high.

Tweets from celebrities, campus groups, and other accounts flooded weekend tweeter into Monday. Here are some of the best:

I can’t be at the KU vs. #KStateMBB game in Manhattan tonight, so can someone PLEASE have a distractingly large cutout of my head(i know, shouldn’t be hard) behind the basket(s)?
Pretty please?? K. Thanks!!

BACK TO BACK WINS OVER RANKED TEAMS pic.twitter.com/WF07Dz03vQ

The “F*** KU” chant has been a big focus of Sunflower Showdown.

In recent years, the K-State student section has chanted against KU at football and men’s basketball games, but students have also chanted it at games against other teams.

If you didn’t make the cut to be a @KStateClassyCat, there is another way to be a classy cat #StopTheChant pic.twitter.com/yTH52yelZn

Folks, it seems we need some new lyrics for our favorite song about storms and sand, some options:

“I do not care for the University of Kansas and hope we beat them. Also the Jayhawk looks like the mascot for a knockoff brand of cereal”

The Wildcats and Jayhawks faced off at 8 p.m., with tension building on both sides. Fans poured into Bramlage Coliseum

The Jawhawks led the first half, ending up with KU leading 40-27. This led to interesting debates and desperate Cats fans on twitter.

I like to think there’s a comically big red button hidden somewhere within the depths of Bramlage that says “sandstorm” on it. It’s in a vault that requires two separate keys to unlock. One of said keys is currently buried somewhere in John Currie’s old backyard.

If you haven’t been inside Bramlage yet, this Snapchat filter is available.

I enjoy it very, very much. pic.twitter.com/s0C2fz607H

The Kansas State men’s basketball team lost its home game versus Kansas 70-56, marking the seventh consecutive Sunflower Showdown loss for the Cats. KU Fans took to twitter in triumph, leaving the Cats looking on to the next game at West Virginia where they will take on the Mountaineers on February 3.

Bruce Weber on how much #KStateMBB prepared for #KUbball zone defense: "None." pic.twitter.com/B2dWUNQNZY

Hey Coach – how many games has KSU won in the last 61 meetings vs #KUBBALL ? pic.twitter.com/J6HVcv4Pzj