The donation supports the Internet Archive, a nonprofit digital library, and The Great 78 Project to digitize sound recordings.

The Internet Archive began in 1996. Over the last 22 years, it has amassed billions of web pages, thousands of software program and millions of texts, images, videos and audio recordings. According to its website, the Internet Archive is one of the top 300 websites in the world and contains more than 30 petabytes of server space. All of its content is available to the public for free.

“The project is, at its heart, a preservation initiative,” said Keli Rylance, head of K-State’s Morse Department of Special Collections. “For many of these 78s, the original ‘mother’ recordings are long gone.”

This is due in part to the nature of the manufacturing process used to create 78 rpm discs, Rylance said. Original recordings were used to create “positive plates.” These positive plates stamped the recordings onto discs to create records. However, the plates could only produce a certain number of pressings before wearing out, getting copied and discarded.

“The Great 78 Project will put these historical sound recordings back in the public realm,” Rylance said. “For musicologists to study, for musicians to generate new sounds, for enthusiasts to enjoy and for record producers to develop digital masters.”

As of August 2017, the project had collected more than 50,000 pieces of vinyl to its collection.

Faculty in K-State special collections department knew of The Great 78 Project before getting involved, Rylance said. During the 2016-2017 academic year, faculty combed through their collections and decided two would be good candidates for the project. Rylance then contacted the project’s developer at the Archive of Contemporary Music in New York to arrange a partnership. Since then, students have joined faculty in preparing the nearly 8,000 sides of audio for shipment to George Blood, an audio and visual digitisation company in Philadelphia.

“Both donors were accomplished musicians who selectively curated their collections,” Rylance said.

These donors were also faculty members at K-State. The first, Charles Stratton, was a musicologist and a pianist. He worked at K-State from 1927 to 1964. His collection was donated by his estate in 1968. The second collection was complied by Roger C. Smith, former head of the entomology department.

K-State’s donations will join those of 400 other donors, including the Boston Public Library. 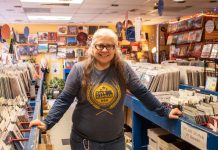 K-State track and field sets numerous records over the weekend