After back-to-back losses, the Kansas State women’s basketball team will look to turn its luck around with a win over the Texas Tech Lady Raiders on Wednesday.

The Wildcats and Lady Raiders will tip off in Bramlage Coliseum at 7 p.m.

“We have a good portion of our group that is really struggling with their confidence right now,” Mittie said to K-State Sports. “I feel bad for our group. We are just out of sync and struggling with those things. It snowballed on us tonight.”

Junior guard Kayla Goth led the team in scoring with 14 points. She also led the team with nine rebounds. Sophomore forward Peyton Williams was the only other Wildcat to reach double figures in points, earning 11.

Texas Tech is in the midst of a four-game losing streak. In their previous game, the Lady Raiders lost at home to No. 3 Baylor, 90-44. All four games in its losing streak though have come against ranked teams.

The Wildcats may not have to score many points to get a win in this game, as the Lady Raiders currently last in the Big 12 conference in points per game, averaging 63.2. There opportunity is there to score points though, as Texas Tech is also last in scoring defense, giving up an average of 74.2 points per game.

Texas Tech rebounds the ball very well though, as the team is fourth in the conference in rebounding margin. Kansas State is at the bottom of that list.

Goth ranks seventh in the Big 12 in scoring averaging 16.1 points per game. She leads the conference averaging 6.6 assists per game. The next closest is averaging 5.5.

Senior guard Shaelyn Martin is one of the top rebounders in the conference, as she ranked seventh with 7.1 boards per game. Williams is right on her tail though, as she averages seven rebounds per game.

K-State will hit the road after the Texas Tech game, as the Wildcats travel to Austin, Texas, to take on the No. 8 Texas Longhorns on Saturday. That game will tip off at 7 p.m. and can be seen on the Longhorn Network or on the Watch ESPN app. 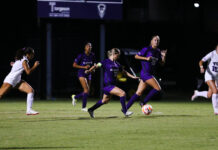 Know Your Opponent: Texas Tech and the Wildcats in for a close game

Know Your Opponent: Texas Tech and the Wildcats in for a...