Pizza Shuttle is undoubtedly part of the culture in Manhattan. The restaurant owes its popularity and status to five things: a college town location, high-quality pizza, delivery in the wee hours of the morning, affordable prices and cream cheese.

The small pizza chain has had a restaurant in Manhattan for almost 30 years. Since February 1988, an ever-changing crew has been selling hot pizza pies in-store and by delivery every day from the corner of Claflin Road and Denison Avenue.

Employees make the dough, pizza sauce and garlic sauce fresh every morning two hours before opening. And there is a lot of it to be made.

Anson Eddy is a manager who has worked at the restaurant since 2001. Eddy said daytime sales are relatively slow, but Pizza Shuttle sells 20 to 50 pizzas per hour during the dinnertime rushes between 5 and 8 p.m. on weeknights, and even more on weekends.

“On the weekends, we’re open till 3 a.m., so we get a lot of that traffic after the bars close,” Eddy said. “So any time late night to about 3 is our busier times. During those times we can sell anything from 70 to 180 pizzas an hour.”

“Cream cheese is a big draw,” Eddy said. “A lot of other places don’t do it, and if they do, they don’t do it like we do. We actually make a cream cheese sauce. I know there used to be another pizza place in town and they offered cream cheese with chunks of cream cheese on it. It just isn’t the same, whereas we do it like a sauce, which is more consistent. It’s in every bite.”

Devon Price, junior in accounting, delivers pizzas on Pizza Shuttle’s moneymaking Friday and Saturday nights. She is one of the only Kansas State students currently working there, though the pizza staple has employed many students over the years.

“I worked for a while to get the hours that I do,” Price said. “It’s kind of like I have to work the least amount of hours for maximum profit because those are the busiest nights. … Before, I had to work during the school week and you just kind of have to suffer through it. I’d go to bed at 3 a.m. and get up for class early.”

Another delivery driver, Hosam Akacha, said he has loved working at Pizza Shuttle for the past three-and-a-half years. Akacha said his job is sometimes made challenging by drunk customers who are passed out by the time he knocks on their door. Some inebriated folks are friendly, but others are not.

“They start giving you a hard time, in terms of ‘Oh, come in, have a drink,’” Akacha said. “And some of them will not be friendly at all. They’ll be aggressive, which I encountered once when there was an issue. He claimed he paid. He did not pay and he was intoxicated.”

Both Price and Akacha said meeting new people when they deliver pizza is one of the perks of the job.

“There was this one house with a group of guys, and it was a musical group,” Price said. “They ordered pizza three times so I’d come back each time, and every time they’d play a song for me. The first time, they opened the door singing, on a guitar, a Pizza Shuttle song they made up. Then they called back and I delivered again and they serenaded me with a piano.”

“Its like the trademark of this town,” Akacha said. “Everybody knows Pizza Shuttle. College kids, families, even college kids who graduate always tell their friends who are coming to college, ‘Make sure you get to Pizza Shuttle.’” 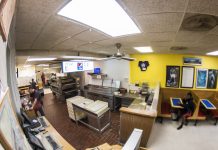 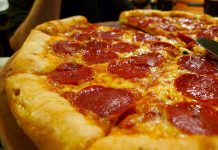 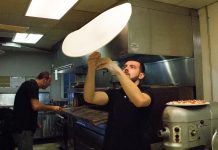