Appearing without their running mates, each of the candidates took turns answering questions prepared by Corbin Sedlacek, SGA elections commissioner and junior in accounting, followed by questions from the audience in the Student Union courtyard.

“It was really important that there were students there [in the process of the change], but the message didn’t get fully across to the rest of the student body,” Roman said, speaking to the confusion among student groups as a result of the change.

Roman said she would concurrently also work to increase support for K-State 360, a program designed to help students keep track of their involvement and activities during their academic careers at K-State.

Roman is running with Michael Leverett, junior in social sciences.

Karl Wilhelm, junior in agricultural economics, said if he is elected, his main focus would be on sustainability in three different forms — community sustainability, self-sustainability and sustainable living.

Wilhelm said he wants to create a stronger relationship between the university and community businesses to provide students with networking opportunities to utilize when they graduate. Wilhelm said self-sustainability focuses on improving and tracking student experiences in their undergraduate careers through greater support for programs such as K-State 360.

Wilhelm said he wants to expand Cats’ Cupboard to possibly include options for protein and dairy as well as fresh produce. Wilhelm also zeroed in on need-based scholarships.

Additionally, Wilhelm said he wants to increase support for green initiatives on campus.

“Now I’m not saying that next year we’re going to have solar panels or wind turbines on campus,” Wilhelm said. “But we want to make sure that we get the ball rolling so that 10-15 years down the line, we have a renewable source of energy.”

Wilhelm is running with Marley Wareham, sophomore in music education.

“We talk a lot about value at our university, but what does that really mean at K-State?” Kiehl said. “Everyone has to pay the same tuition and all that kind of stuff, but we want to talk about expecting more from our student leaders, from our administration and from the different resources on campus.”

Kiehl said she specifically would focus on affordability, access and accountability as the main pieces of her campaign

Kiehl said greater access to resources is also key for student success and that, if elected, she would focus on getting students to feel connected to the university.

Finally, Kiehl said it is her goal to increase transparency and outreach of SGA with the student body.

Kiehl is running with Lacy Pitts, junior in agricultural economics and student senator.

Moreland said transparency begins with better communication from the student body president, via initiatives such as student town halls and letters from the president. Such initiatives would give students more frequent and casual opportunities to engage with student government, Moreland said.

“A lot of the people, I believe, in SGA tend to be from the same background,” Moreland said. “When I was in the dorms my freshman and sophomore years, I felt very disconnected from SGA at that point until I got a senate committee and felt more involved.”

Moreland said safety would tie into his platform under the unity plank, with ideas like improving campus lighting.

Moreland is running with Sean Marshall, sophomore in political science.

Primaries for student body president run from noon Tuesday to 6 p.m. Wednesday. From there, the two selected candidates will advance to the General Election in March. 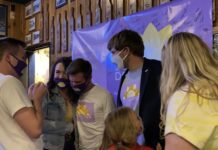