K-State Tennis looks to break the University of Colorado’s undefeated streak on Sunday, Feb. 18 at 12 p.m.

The Buffaloes are 5-0 this season, which is only one win away from tying the second-best start to a season in school history.

The Wildcats are 4-1 this season and coming off a huge comeback win against Washington State, starting out down 3-1 and finishing 4-3 thanks to important singles wins from senior Carolina Costamagna, sophomore Ines Mesquita and freshman Anna Turco.

“Down 3-1, hats off to Carolina, Ines and Anna,” head coach Danielle Steinberg said to K-State Sports. “They believed in themselves and their teammates, and it showed. We played with conviction and with no hesitation. I am extremely proud of the team for today’s effort.”

One of the Wildcats’ biggest threats coming into this match will be freshman Linda Huang, who is 16-3 in singles play this year.

The Wildcats will need to lean on strong doubles play to win this match, as the Buffaloes are weaker in doubles than they are in singles. 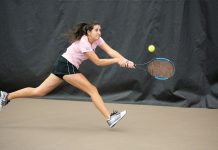 Across the Atlantic: Anna Turco finds success with Wildcat tennis 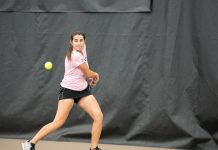 Tennis defeats SMU 4-1, advancing to 7-4 on the season

Wildcats return to the court against West Virginia after twelve days...