Farmers and ranchers went to Buhler, Kansas, from far and wide Saturday with hopes to see what the agricultural community has to offer at the third annual Kansas Cattle Drive.

The Kansas Cattle Drive started with only 17 cattle pens and six volunteers. This year, capping at 30 pens and 120 volunteers, Busick is still looking to grow the event.

“It’s taken a legs of its own right now,” Busick said. “We’ll just see what direction it goes, but I’m hoping to try new things.”

Though the Kansas Cattle Drive currently has pens from only Kansas farms and ranches, seven states were represented at the drive and are hoping to bring their pens in the future.

Jeff Smith, the owner of S&S Farms, came with his choice of bulls to represent his family farm. Smith said he has attended the cattle drive since its debut three years ago.

Smith said the Kansas Cattle Drive allows for the chance to show how much his family farm has grown and how much it can continue to grow in the future. He also said the event gives his farm “visibility” that would otherwise be unavailable to his fifth-generation farm.

Dustin Crittenden, a 2009 K-State graduate, works for Arrowquip, selling and distributing equipment made for cattle production. Crittenden said the cattle drive has “like-minded people” and is an “innovative” way to get involved with other “progressive producers.”

Crittenden said he plans to attend next year’s cattle drive to spread the word about Arrowquip and to teach others about the equipment it provides.

Kyle Baker, another distributor of Arrowquip equipment, attended the drive to take advantage of a unique opportunity to show off how the company’s cattle chutes work.

“We were able to run live cattle through it, and so that’s just a real bonus to us,” Baker said.

Both distributors stated they hope to see the Kansas Cattle Drive grow to allow for even more farmers and ranchers to show off what they have to offer on the agricultural scene. 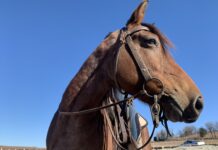