The Parkland, Florida, school shooter was arrested and is being held in the Broward County jail on suicide watch without bail. According to The New York Times, Nikolas Cruz used a legally-purchased AR-15 rifle at Marjory Stoneman Douglas High School. Reportedly, the FBI received a tip months ago about Cruz’s intentions to become a school shooter. Cruz will be tried on 17 counts of premeditated murder. Among the deceased were 14 students and three faculty members.

A five-year-old boy from Wichita was reported missing at 6:15 p.m. on Saturday. The Wichita Eagle reports that Lucas Hernandez was last seen by his stepmother at 3 p.m. Canine units started a search of Chisholm Creek Park on Sunday at 6:30 p.m. An Amber Alert has not been issued because the police have been unable to find signs of abduction. There have been no new developments in the case.

Robert Mueller indicted 13 Russians in special counsel investigation on February 16. Politico reports that these Russian nationals and three additional entities conspired to disturb the 2016 American presidential election. The disruptions, led by an Internet Research Agency based out of St. Petersburg, began in 2014. No known Donald Trump associate was included in this indictment. The official report does not detail direct orders from the Kremlin.

Eric Hosmer leaves the Kansas City Royals to begin playing for the San Diego Padres. According to the Kansas City Star, Hosmer turned down a nine figure contract that would have been the biggest in franchise history. Some put the number at an estimated $140 million. San Diego, slated to have a rebuilding season, has not played in the playoffs since the 2005-06 season. Hosmer’s eight year contract with the Padres is valued at $144 million.

Kansas GOP created a resolution that defines party stance on gender identity at the state party convention. The Wichita Eagle reports that the resolution was authored by Eric Teetsel, president of the Family Policy Alliance of Kansas and the son-in-law of former governor Sam Brownback. The resolution recognizes LGBTQ rights and outlines the principle that God created all people equally, but only meant for the two biologically defined genders. Additionally, the resolution dismisses surgical or hormonal efforts to change someone’s birth gender. 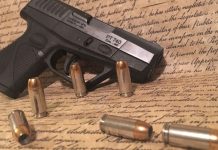 OPINION: Gun ownership is not more important than the lives of children

OPINION: It’s the most wonderful time of the year: major league...