Members of the K-State community will have to find places to smoke off-campus come June 1, as President Richard Myers announced sweeping changes to the university’s tobacco policy on Friday morning.

The changes will extend the existing ban — which currently prohibits smoking inside of all university buildings and vehicles, as well as within 30 feet of entrances to those buildings — to smoking on all campus property and buildings, with the exception of smoking inside of a personal vehicle on campus property. The ban will apply to the Manhattan and Polytechnic campuses, as the Olathe campus already has its own ban that bans tobacco in its entirety.

“Everyone has the right to breathe clean air at work and school, and becoming a smoke-free university will improve the health of our university community,” Myers said in the release.

The ban prohibits the use of “cigarettes, cigars, pipes or burning tobacco in any other form or device, as well as the use of electronic cigarettes, vaporizers, hookah or other water pipe devices and all other related devices.”

The move comes from a yearslong effort starting with former president Kirk Schulz in 2015 after the Kansas Department of Health put pressure with a $25,000 grant for K-State to more strictly regulate smoking. In February 2016, the Student Governing Association narrowly passed a resolution 26-25 calling for a campus-wide tobacco ban, although Schulz ultimately resigned before coming to a final decision on the matter.

Last spring, Myers signaled his intention to move toward a total smoking ban on K-State’s campus. Since then, the special committee on smoking and tobacco engagement has worked to find ways to most effectively implement such a ban, such as finding resources to help students and staff who smoke quit smoking.

According to an FAQ section on the vice president for Administration and Finance page on the university’s smoking policy, the decision to not extend the ban to all tobacco products came after discussion with each of the university’s governing bodies, including the Student Governing Association, the Faculty Senate and University Support Senate.

The university states that the policy is meant to be self-enforced, although faculty and staff could face disciplinary actions for violating the policy. The university will consider student smoking to be a violation of the Student Code of Conduct, although it was not immediately clear what disciplinary action might result as a result of a student violation of the code.

K-State will join other major universities across the state in banning smoking, including KU, Emporia State and Wichita State. 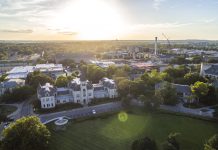 While you were gone: Manhattan’s notable summer news