Freezing temperatures and rain did not deter the small crowd that gathered at the Kansas State Alumni Center on Thursday night for the latest installment of the Lou Douglas Lecture Series put on by the UFM Community Learning Center and the Beach Museum of Art for students and patrons alike.

Award-winning screenwriter and independent filmmaker Peter Bratt screened his new documentary “Dolores” for all in attendance.

The film highlights the struggles and victories of Dolores Huerta, an American civil rights activist who was the co-founder of the National Farmworkers Association with Cesar Chavez, which later became the United Farm Workers. The film covers her family and closest confidants as well as the gender bias and racial discrimination she battled in her social activism.

“She was very nervous when I initially told her I wanted to make a documentary about her,” Bratt said after the end of the screening in an open Q&A. “She doesn’t like to necessarily talk about herself, and she was very hesitant about discussing her relationships, especially with her children.”

Huerta agreed to the film, however, and it was first released at the Sundance Film Festival in Park City, Utah, last year on the day of President Donald Trump’s inauguration.

“It was a very spiritual day, when everyone was feeling a little down and dejected, but everyone was there,” Bratt said. “At the end, everyone was very emotional and crying, and it was just what people needed to see at the time.”

Bratt said he hopes that through this documentary, Huerta’s example and work can inspire other activism. When asked by a student how one can be an activist like Huerta in a field of work where it may be difficult to apply such activism, Bratt referenced Joseph Campbell’s “The Hero’s Journey” and George Lucas’ “Star Wars” as positive examples.

“It is necessary in our lives to maybe leave what we come from to pursue something greater or to reach greater heights, like when Luke and Leia have to leave their homes to become heroes in ‘Star Wars,'” Bratt said. “Sometimes, you might have to sacrifice something big, something that is important to you to be able to achieve something greater, like Dolores had to do.”

The Lou Douglas Lecture Series’ mission is to attract thought-provoking speakers in honor of Lou Douglas, a distinguished professor of political science.

“Lou was known for his ability to inspire other people and organize grassroots movements to make change on social, economic and political levels,” said Linda Teener, executive director of the UFM Community Learning Center.

Linda Duke, director of the Beach Museum, said the screening of “Dolores” was part of a greater campus initiative.

“We are really pleased that this program is part of a campus-wide initiative called ‘Living Democracy’ where we are exploring listening to the voices of lots of people,” Duke said. “We hope we can start a dialogue between different people from ourselves.” 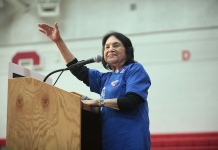 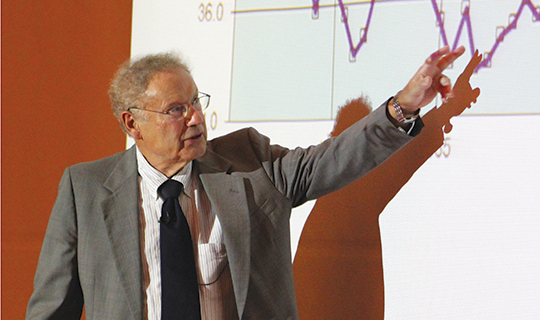