The Kansas State track and field teams competed in the Big 12 Championship in Ames, Iowa, and won several events on Friday and Saturday.

On day one of the Big 12 Championship, K-State won 16 medals in six different events.

Senior Mitch Dixon won the men’s weight throw in the first championship of his career. He threw for a distance of 21.58 meters for his final attempt in the event. With his final throw, Dixon was able to beat the University of Texas’ Alan Zapalac.

“This is what I have been working and training for; this is the culmination of all of our work,” Dixon said to K-State sports. “This [Big 12 Championship] is the best competition that I have been a part of. It feels great.”

Dixon took first in every weight throw competition he competed in this indoor season.

In the women’s pentathlon 60-meter hurdles, Ariel Okorie and Lauren Taubert finished second and third with times of 8.40 and 8.55, respectively.

Day two of the championships was highlighted by Schultz winning the high jump and high point award.

This is the second time in her career that Schultz has won this honor. With her high jump victory and 23 points, she helped lead the Wildcats to 24 all-conference honors at the championships in Ames on Saturday.

“I think the biggest battle is always mental,” Schultz said to K-State Sports. “We are physically prepared to come and do well. Overcoming mental barriers is always a tough thing to do, but I was prepared to push myself.”

Schultz finished her high jump victory with a height of 1.85 meters, beating her previous personal best.

Senior Terrell Smith tied for fourth place in the men’s 200 meters and sixth in the men’s 60-meter dash finals.

Brett Neely threw for a distance of 19.11 meters in the men’s shot put, placing third, and Kyle Mitchell finished with a throw of 17.63 meters to put himself in fifth. 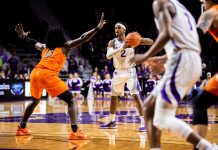 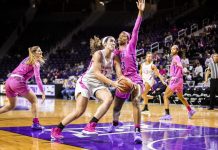