Myers spoke to students in the Bridges International organization, a worldwide Christian group, about being a leader.

Jane Fox, staff member for Bridges International, said the organization works to “serve international students and give them opportunities to serve.” Fox said this event specifically was designed to give students a chance to meet the president.

“We seek to help them with social connections, spiritual resources and student leadership,” Fox said.

During his speech, Myers said integrity, selflessness and service are three specific skill sets that allowed him to become the leader he is today.

“To be a good leader, you have to have a strong foundation in yourself, which is integrity,” Myers said.

Myers said the most difficult position he held was when he was chairman of the Joint Chiefs of Staff.

“I was sworn into that position 20 days after 9/11 and seven days before we were in the war in Afghanistan,” Myers said. “My whole ten years of chairman, we were at war. Those were tough days. The chairman was the guy that stands on that line between political authority and the military.”

President Myers said he would encourage all students to think about the “Three H’s” which are honor, humility and humor.

“They don’t take credit for everything, they understand when they’re foul, they’re going to make mistakes, and their only promises is they will try to do better in the future,” Myers said. “Life is tough at times and sometimes you have to use humor to ease the pain.”

K-State graduate Irma Ailon said she appreciated the opportunity to hear Myers speak. Ailon said she felt like learned how to become a great leader and how to impact lives.

Prathibha Desman, graduate student in chemistry, said being involved with Bridges International has been very impactful.

“[Bridges International] is a place where everyone from all over the world can come together and make friends, and at the end, it is a big family,” Desman said. “It’s about the relationships we make and the values we share.”

Myers said he was impressed with Bridges International and the work they continue to do for K-State.

“What you have here is something very special,” Myers said. 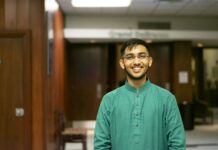