Currently, the committee allocates about $350,000 a year to K-State Athletics, but if the new bill is passed, the legislation would cease that allocation.

A second piece of legislation is also being authored to re-codify the relationship between SGA and K-State Athletics in the absence of the committee’s allocations. This new bill, if passed, would allow K-State Athletics to continue to sell student passes “as demand allows.”

“In my opinion, it’s a good thing because it’s forcing us to keep visiting the table with Athletics and having a good working relationship,” said Sarah Niederee, committee chair and senior in agricultural economics.

Jordan Martin, senior in computer science and student senator, said it will be important to keep a working relationship between SGA and K-State Athletics.

“In the past, we’ve had a financial relationship with them to where, if they do something we don’t like, we take money away from them,” Martin said. “Now I understand we don’t have that anymore, but I think we still have a good relationship and that K-State Athletics isn’t going to want to openly hurt that relationship.”

It was moved and seconded to author the legislation in question and unanimously passed.

Mark Buckwalter, junior in accounting and at-large committee member, said he believes that Lafene is deserving of an increase because he is confident the money will “go to good use.”

“I do like how they kept their promises from the last Privilege Fee Committee,” Buckwalter said. “I trust the people who work back there, I feel like, more than Counseling Services.”

Discussions on Lafene will continue when the committee reconvenes on Monday at 5:30 p.m. in the SGA conference room in the Center for Student Involvement. 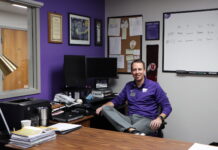 Three cases of mumps confirmed at K-State within 21 days