While Wildcats emptied out grocery stores’ supplies of juice and green Jell-O in preparation for another round of Fake Patty’s Day drunken debauchery, officers of the Riley County Police Department hunkered down and psyched themselves up to monitor a full day’s worth of binge drinking.

Well Manhattan, today is the day 🍀

Do we get to party and have fun? No. But do we get to watch everyone be safe and follow all of the laws? Also no.

At 9:17 a.m., the RCPD Twitter account announced the first alcohol-related arrest of the day, along with some tips on what to do if your pal Susan gets cut off by law enforcement.

In honor of our first alcohol related arrest before 11 AM. Here is some helpful information for you if you need to get ‘Susan’ out of jail. pic.twitter.com/O17A6otYwa

And later, a few words of wisdom.

Good rule of thumb for today: Don’t do anything you wouldn’t want your mom to see on @BarstoolKState

Officers offered a sentiment of solidarity to a lone soul on clean-up duty.

S/O to the dude on Ratone raking the beer cans in his yard.

In an attempt to communicate with the youth of Manhattan, the RCPD adopted an unconventional strategy to get their point across.

Just past noon, it was apparently necessary to remind some people that stealing isn’t very nice.

We all know the saying “Finder’s Keeper’s” right? Well, according to the law, finding someone’s property and keeping it is referred to as stealing.

Feed them and give them water!

The first minor arrested for possession wore a shirt that predicted their fate… almost.

The first person arrested for MIP was wearing a shirt that said “I will be the #1 draft pick” https://t.co/jlyYiknGmo

The next shift of officers is coming on duty. Stay safe Manhattan. pic.twitter.com/mifhgZh02N

Officers from other departments offered support.

Shoutout to @KHP @emporiaPD @LawrenceKS_PD @LyonCoSheriff @KStatePolice and Pottawatomie County Sherriff’s Office for helping patrol #FPD2018. All officers from these jurisdictions have police power during this event and are able to issue citations and help make arrests.

Later, a moment of silence for the fallen.

RIP to all the beer we confiscated from a minor. pic.twitter.com/zezqfcNYWO

Someone departed a kind compliment to an officer hard at work.

Remember that minor who we took the Budlight from? He apparently thinks officer Swartz is a B…..eautiful human. pic.twitter.com/3dEHqzKmyc

Just in case anyone was wondering what was for dinner Saturday night, the RCPD sent out the menu.

Sausage and biscuits in the morning.

We all love sleep, but alcohol blankets don’t work well on sidewalks.

Im sorry. But Thank you to the officer that stood by and helped me wake up this morning .

Despite all the drunken antics, Fake Patty’s Day revelers still made officers proud.

However, some people did need a reminder that the world is not their oyster — or their restroom.

After walking around Aggieville this needs said.

Also, the RCPD may not understand what Uber is. The intention was sweet, though. 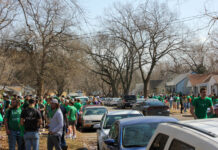