The Kansas State rowing team will travel to Sacramento, California, to compete in the Hornet Invitational this weekend on Saturday and Sunday.

Last Saturday, the team competed in a scrimmage with the University of Oklahoma in Oklahoma City, Oklahoma. This was the first competition against another team since the Jayhawk Jamboree in October.

“We had a really good training day, the first thing I would look to do is thank Coach [LeAnne] Crain and the Oklahoma staff and team for letting us come in and scrimmage against them,” head coach Patrick Sweeney said to K-State Sports. “It was very important to get on the water, and the good thing was I think all of our crews learned a lot and were able to take advantage of the scrimmage.”

The team had two training sessions with three of their Varsity 8+s and two of their Varsity 4+s. The first one started at 8 a.m., and the second started at 1 p.m. This was to help get the team get ready to compete in different racing scenarios. Specific concentration was on starts and on rowing at the same pace you would in a race to help prepare the team and improve its strategies.

“I am really pleased with how we have prepared to this point,” Sweeney said to K-State Sports. “Going forward we will focus on mechanics and getting sharper, which will come with water time, but overall I am pleased with how the team performed.”

Their second first place finish was in the women’s novice 8+ boat that was steered by lacovetti, and included rowers Leah Gaines, Aubrey Gilchrist, Macy Flory, Skylar Gottschalk, Hebbert, Geither, Pekarek and Hartman. This novice 8+ boat finished more than 20 seconds faster than the next boat with a time of 15:42.29.

On this year’s roster, 95 percent of the rowers have no previous rowing experience prior to college, though most of the athletes played some sport in high school. The team typically trains between 10-15 hours per week. They practice every weekday morning on the water and have strength and conditioning training two to three times per week. 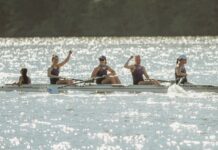