Big 12 conference play did not start off on a high note for the Wildcats baseball team, as they lost all three games of a series with Texas Christian University in Fort Worth, Texas, this weekend.

The first game on Friday was the closest of the three games, but K-State was ultimately defeated by a score of 4-2.

TCU got on the board first with a solo home run in the second inning from Conner Shepherd.

Both teams were held scoreless in the third inning, but the Wildcats came alive in the fourth inning.

Their first run came when T.K. McWhertor hit a double that scored Hanz Harker. With the next at bat, Brett Owen would send Rainier Ausmus home with a groundout RBI.

K-State went up 2-1 and held that lead until the eighth inning.

In the eighth inning, TCU’s Luken Baker knocked a two-run homer over the fence to take a 3-2 lead. The Horned Frogs would score once more to go up 4-2, and their pitchers sealed out the game in the ninth inning.

Despite the loss, starting pitcher Kasey Ford did well for K-State. In seven innings, Ford allowed six hits and just one earned run, and he struck out six batters.

A thorn in the side of the Wildcats during the opening loss was struggling to bat with runners in scoring position. They connected on just 1-of-13 pitches in those situations.

Game two ended up being a blowout, as TCU worked K-State to the tune of a 12-2 score.

K-State went up 1-0 with a home run from Jordan Maxson. After two innings, the game was tied at 1-1, but the Horned Frogs exploded with a five run third inning.

TCU wrapped up the series on Sunday with a 6-0 victory.

It seemed to be a trend for the Horned Frogs to get their runs in bulk, and that was the case as they scored three runs in the opening inning and three more seventh.

K-State was held to just four hits on the afternoon.

The Horned Frogs were led offensively with three RBIs from Zach Humphreys and two runs from Connor Wanhanen.

The Wildcats will get one day off before hosting the University of Nebraska Omaha on Tuesday. K-State will then host Texas for another Big 12 series Thursday through Saturday.

The Omaha game is scheduled for 6:30 p.m. Tuesday and will be streamed on ESPN3. It will also be aired on KMAN radio. 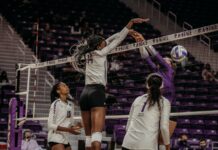 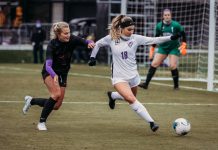 Soccer team falls to No. 5 TCU in overtime despite early lead 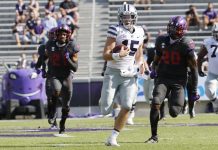