Gun control was a big topic of discussion among Kansas State students following the March for Our Lives protests across the country over the last week.

Justin Wastler, freshman in parks management and conservation, had much to say on the topic of gun control.

“Targeting gun owners is like pouring acid on your leg in response to your arm needing sutures,” Wastler said. “The worst case scenario is that the Second Amendment is repealed, which is improbable. Even if this occurs, it won’t stop gun violence.”

A sticking point in the gun control debate is the relative ease in which someone can buy a firearm. In the U.S., a background check is required, but only for in-store purchases. Following this, gun buyers must fill out a form from the ATF, or the federal Bureau of Alcohol, Tobacco, Firearms and Explosives.

Even though this is required for in-store purchases, you do not need a background check to buy a gun at a gun show. Conor Horn, freshman in computer science, said there needs to be stricter background checks.

“Punishing all gun owners for this would be unjust and unconstitutional,” Horn said. “So what makes sense to me is better enforcement of background checks, a certification process to ensure those who have guns know to use them responsibly, more waiting periods after buying a gun and age restrictions regarding guns.”

Wastler said the gun control movement is a reactive one, as opposed to a proactive one.

“We’re a long ways from resolving this debate,” David Lopez said, freshman in mechanical engineering. “Helping with gun regulation might resolve the issue, but there will always be problems, maybe worse than now if firearm restriction becomes stricter.”

Lopez also said there are multiple variables to take into account.

“Ex-militaries are well educated to use [a gun], but one bad day could set them off or PTSD issues and the wide variety examples there are to be listed,” Lopez said.

Horn said our rates of gun violence are obscenely high for a developed country, and you can’t go more than a few weeks without hearing about a mass shooting.

According to information reported by Vox, homicides are three times more likely to involve a firearm in the U.S. as compared to other countries like Finland, Canada and Australia.

Thomas Bauman, freshman in civil engineering, said there should be more security measures at schools to prevent school shootings from occurring.

“I think that it is good for them to exercise their First Amendment right and stand up for something that they believe in,” Bauman said. “They should have tighter security checks on people who buy guns as a way to see if they have done sort of anger management problem or are unstable in any way.”

Letter to the editor: Lobbying groups, NRA should be banned from making political contributions

Letter to the editor: Calls for more gun control are based on misguided claims, not facts 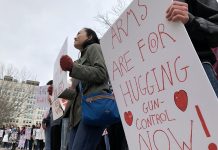 Students lead March for Our Lives rally at state capital: ‘This is our time now’

Students lead March for Our Lives rally at state capital: ‘This...