Home Community Letters to Editor Letter to the editor: Lobbying groups, NRA should be banned from making...

Letter: Calls for more gun control based on misguided claims

They do not represent gun owners even though their membership roster contains many. They are a lobbying group whose sole reason for existing is to further the profits of deep pocket gun manufacturers.

This is not a bad idea. For one thing, it would make elected officials once again beholden to the people who vote for them rather than the businesses that fund their campaigns.

A rising death rate that will surpass gun-related deaths, if it hasn’t already, is pharmaceutical deaths. Specifically, we would not be in what is now termed an opioid crisis were it not for lobbying on behalf of drug manufacturers to loosen prescribing guidelines on drugs that were developed as palliative care for people dying from cancer and other excruciatingly painful diseases.

Trust me, my bum knee doesn’t need Oxycontin, but I can get it. Drugs that are now fast-tracked through the FDA approval process and subsequently found to be more harmful than good might rightly fail that approval process if given longer trials and closer scrutiny.

A downside to forbidding lobbying groups to fund political campaigns would be that some worthy groups would lose the ability to fund the campaigns of like-minded politicians, but if we’re going to punish everyone for the bad actions of a few (hmm, sort of like gun restrictions?), then we need to do it across the board, in all areas where there is a threat to this country’s citizens.

Julie Eklund is a Kansas State alumna and associate of the Lesbian and Gay Veterinary Medical Association at K-State. The views and opinions expressed in this letter are those of the author and do not necessarily reflect the official policy or position of the Collegian. Please send comments to opinion@kstatecollegian.com. 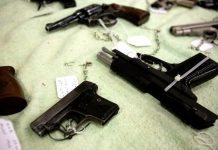 Letter to the editor: Calls for more gun control are based on misguided claims, not facts