On the 50th anniversary of Martin Luther King Jr.’s assassination Wednesday, campus leaders gathered to urge the Manhattan community to strive to be more inclusive in remembrance of his legacy.

At a vigil in the afternoon, Bernard Franklin, special assistant to the university president and Kansas State alum, described King as an “intellectual giant,” who he said the likes of which only come about once in a lifetime.

While King could have lived a life of splendor in the north as an educated black man, he chose to live his life in the south to help defend those who were unable to defend themselves because of Jim Crow laws, Franklin said.

“He was a spiritual man, a teacher, a father, a guide and a husband,” Franklin said. “He used his identity as a proud black man and his fighting spirit of a warrior to help make changes to the lives of all oppressed people.”

Dariyan Springfield, junior in animal science and member of Alpha Phi Alpha fraternity, said the message of King speaks to him.

“Dr. King’s courage and boldness have helped me to not be afraid of the social norms and stand up for what I believe in,” Springfield said.

Franklin said the best way for King’s legacy to live on is by preparing the next generation and celebrating the “mosaic culture” present in Manhattan.

Franklin said society needs to continue to be dissatisfied until there is no more oppression between different racial groups in order for King’s message of equality to continue to resonate.

“I’ve been impressed with Dr. Franklin because he speaks great truth and I feel privileged to call him a friend because he reminds me of Martin Luther King Jr.,” Hammerschmidt said.

Franklin’s closing remarks ended urging students to think carefully, authentically and truthfully about what they give their lives for and challenged them to find a way to make both Manhattan and K-State a better place.

“We still have a ways to go in loving one another,” Hammerschmidt said. 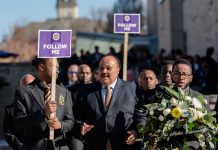