The third annual 48 Hour Film Festival concluded Thursday night with contestants gathering for the premiere of the submitted films and award ceremony for the top three films.

Rusty Earl, television producer and director within the College of Education, presented the awards. Earl said the highest possible score a film could receive was 190 points.

“The winning team received around 180, and the scoring for the places after first was very tight as well,” Earl said.

With a festival high of 13 submissions, four more submissions than last year, the total run time of all of the films was 72 minutes. An audience poll was taken after the premier to determine the Audience Choice Award along with the awards based off of the scores of the judges.

The festival kicked off on March 29 at 6 p.m. with all contesting production groups creating an original film of any genre in two days.

The films, which must be at least two minutes long and cannot exceed six minutes and can cover any story or genre, are required to include three unique elements. This year, the elements were using a parking lot location, a mirror as a prop and the line “I was born too soon” at least once.

All films had to be submitted by March 31 at 7 p.m. to be judged for technical and artistic merit, the incorporation of the three required elements and effective storytelling.

This year’s judges consisted of Nick Abt of Abt Films, a film production company in Wichita; James Mock, retired director of video production for Kansas State’s Division of Communications and Marketing; and Don Sae Kang, video producer at Dynamix Inc. in Wamego and co-founder of Film@MHK.

“It was a huge honor to be a judge for this competition,” Kang said. “I was really impressed with everything the contestants were able to do in the 48 hours they had, and they did a really wonderful job.” 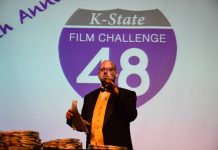 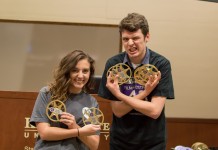