Jonathan Peuchen, speaker of the student senate, and Andrew Peuchen, Student Governing Association treasurer, discuss what it’s like working with a twin, sharing a major in mechanical engineering and reflecting on their time serving in SGA.

Kaylie McLaughlin, assistant news editor: “What is it like working in close proximity to your twin? I have a twin sister, and we don’t do anything together.”

“I know that when Andrew is going to do something, it’s going to get done to the standard I want it done to, which I think this year has really been a benefit with a lot of our changes, that we are revamping our allocations process. As bad as this sounds, I’ve been to like one allocations meeting, but as speaker, I know that it’s going to get taken care of because I’ve got Andrew.”

Andrew: “Growing up together, we’ve had a number of the same interests, so we worked on a lot of the same things. In high school, we were involved in Family, Career and Community Leaders of America. We both kind of had the same goals and aspirations there to be involved in a high level and do a lot of stuff in that.

McLaughlin: “How do you think having a twin made you a different person?”

Andrew: “You have somebody who was brought up the same way as you, so you never have to worry that they are not going to understand the way you see a certain situation. … They kind of see the issues in the same light as you because they have the same background and know what allows us to see it that way.”

Jonathan: “I think the only thing that I can really add to that would be, when you have a twin, it’s like your best friend that has almost every life experience shared with you. I think that’s the best way to sum it up.”

McLaughlin: “What would you say has been the overall biggest accomplishment of SGA in this academic term?”

Andrew: “Yeah, we changed a lot with allocations, but that’s really not an accomplishment. That’s just leadership deciding.”

Jonathan: “I was just going to jump to decreasing Athletics to zero [for privilege fee allocations] because I think that that’s a direct benefit to students in a time that we were faced with a mandatory increase because of declining enrollment. I think that’s a huge accomplishment.”

McLaughlin: “What has been your favorite part of serving in SGA?”

Jonathan: “Definitely the people that you get to interact with, the people you serve with. … Those types of people make it so much fun. It’s just working with students on all different sorts of projects and getting to see the needle move on big student issues would probably be what I feel is the most rewarding thing.”

Andrew: “I guess I’d say also, from my side, allocations isn’t exactly as glamorous as Stephen Kucera would describe it, but the reward in allocations comes from helping students be able to do things they wouldn’t otherwise be able to do without support from SGA and from the privilege fee.

“One example I have is the Final Frontier Aerospace. They don’t get any support from the university to go to their competitions or anything, and their president put $500 of his own money into buying materials for this club and helping them be able to function this year. So, we were able to give them a pretty good-sized allocation to help them with their funding for next year. Knowing that rocketry isn’t something that there are a lot of opportunities for here at K-State and that we are able to help these people go chase their goal of becoming involved. There’s one guy who I talked to at their booth today, wants to go work for NASA. … Here’s an opportunity that K-State doesn’t readily provide, and here’s SGA able to help these people learn about rocketry.”

McLaughlin: “What do you think is your favorite position that you’ve held in your time in SGA?”

Andrew: “I’ve been the treasurer for two years.”

Jonathan: “You must have liked that, you did it twice.”

Andrew: “The second time, I wanted to make sure because we have all those changes coming through to the position this year, and this was before I knew about the changes to the whole CSI and ISO/DSO. We had all these changes coming to the position, and I was kind of wanting to make sure they went really well. I liked the change this year from the previous year. My first year, I was basically just an allocations chair. … This year, it changed to more of a projects based role. … It wasn’t a set schedule every week.”

Jonathan: “I think my favorite role was probably serving as speaker. … When I have people come rant to me about how student senate isn’t doing anything because we never have any big debates, but we’ve never had more than like three big debates a year. … A lot of the rest of the work we do is pretty process-based. It’s pushing legislation through committee, funding student groups — you know, making changes to our policies. People complain, ‘Oh, that’s mundane. You know, that’s not what I signed up to do.’ Well heck, I don’t know where you got disillusioned on what we do.

“Even though it might seem mundane, for the student group that can’t afford to go on a trip, getting $1,000 to go to a conference is big for them; they now have the opportunity to do that instead of paying out of pocket for it. … Speaker of the student senate has probably been my favorite role because I think you get to do a little bit of everything. … Another thing is all the students you interact with, all the student senators and getting to see people grow throughout the year. That’s also another unbelievable thing about this role.”

McLaughlin: “What do you wish had come differently during your time in SGA?”

Jonathan: “There’s not any lingering things that I dislike. … I feel like there’s going to need to be some revisions to the college tuition committee model, and I think that will be interesting. … I can’t say it’s gone bad because we don’t know how things are going to end, and I think it could really end up good. But I think it will be tough because the deans are going to feel like we are taking authority away from them. … Even when there’s huge disagreements in senate, everyone is usually still friends afterwards.”

Andrew: “I wouldn’t say anything has gone terribly that would need to be changed or anything.”

McLaughlin: “What plans do both of you have for the future?”

Andrew: “I’ll start this one because we know Jonathan doesn’t have any plans. After graduation, on May 12, I’m going to get married, and then I’m going to enjoy a little bit of summer before starting my career at John Deere in Iowa as a product development engineer.”

Jonathan: “I will be graduating in May, and I will begin working full time. I currently do not have a job, but I am considering two job offers right now, trying to make a decision as to where I will end up.” 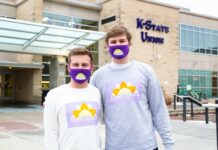