The Kansas State baseball team clenched defeat out of the jaws of victory in a high-scoring, back and forth affair against the University of Nebraska Cornhuskers 11-9 on Tuesday in Manhattan.

A rather quiet top of the first gave way to an offensive explosion by the Wildcats in the bottom of that inning.

“I was just up there with the same approach that I have been having, and I just tried to stay simple,” Thompson said.

Poor pitching from freshman Quinton Potter would end his day early. He gave up two runs on no hits in the top of the second, and three in the third before being pulled with no outs.

He ended up only recording just two innings for K-State before being replaced. He gave up five total runs on four hits, recorded one strikeout and offered up two free passes.

K-State did manage another run in the bottom of the third after freshman third baseman Brett Owen hit a one-out double. He was scored by freshman left fielder Dylan Watts on an RBI ground out to the pitcher.

The Wildcats wasted an opportunity in the bottom of the third. A leadoff walk and a double from junior third baseman Rainer Ausmus netted just one run and the Wildcats cut the Husker lead to 5-4.

Thompson recorded another RBI, this time a single to tie the game at five runs, in the bottom of the fourth. He scored sophomore designated hitter Will Brennan, who had reached after being hit by a pitch with one out in the inning.

Continuing the back-and-forth nature of the night, Nebraska took back the lead in the top of the fifth on a two-run home run by sophomore third baseman Luke Roskam made it 7-5.

The game calmed down momentarily after the fifth, but it would pick back up quickly. K-State got one run back in the sixth on an RBI single by senior first baseman Trent McMaster.

Brennan came in from the designated hitter spot during the sixth and provided one and one-third innings of hitless pitching for the Wildcats.

“He looked really good tonight,” head coach Brad Hill said. “The positive thing about it is that we found out [that he can pitch well] tonight and now we need to utilize him on the weekends in the Big 12.”

The Wildcats had a big seventh inning. A sacrifice fly all the way to the left-center warning track in the seventh by Thompson scored a pair of runs to give K-State an 8-7 lead. Then, Ausmus hit a ground rule double to score Watts to make it 9-7.

A three-run home run by junior catcher Jesse Wilkening took the lead back for the Huskers in the top of the eight. Nebraska managed four runs in the eighth.

The losing pitcher for the Wildcats was freshman Alex Belch, who provided one and one-third innings on the hill. He allowed two runs on one hit.

The Wildcats moved to 15-18 on the season after the loss. They are on a six-game losing streak.

“We got to keep grinding. That is the hard part about it, you are going in to face a top-10 team,” Hill said. “We need to figure out ways to correct some of the mistakes.”

The Wildcats will travel to Lubbock, Texas, to take on Texas Tech in a Friday-Sunday series this weekend. 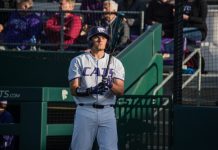 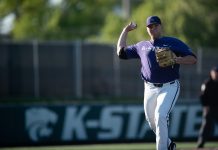 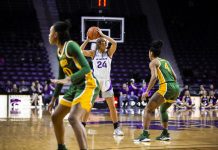 A packed week lies ahead for K-State Sports

Wildcat baseball gears up to start the 2017 campaign