The Wildcat track and field teams will travel to Lawrence to compete in the Kansas Relays Quadrangular later this week, Wednesday through Saturday.

“Going into the competition I felt like we could have a solid team performance and I think we competed relatively well across the board,” assistant coach Vincent Johnson said to K-State Sports after the Texas Invitational. “It is always good to go into the next week healthy and strong after a competition.”

This is one of the three meets remaining before Big 12 Championship, and the Wildcats are working to make sure they are at their best for the conference championship.

“Heading into the final few meets before conference, I think we have some who are right where we expected them to be and some who are making a strong effort to get there,” Johnson said to K-State Sports.

Senior A’Keyla Mitchell is coming off a second place finish with in the 400 meter race with a sprint of 53.54. Her teammate junior Ranae McKenzie finished behind her in third with a time of 54.19.

Junior Kurt Loevenstein was one of three Wildcats to finish in the top 10 of the men’s 800 meters as he finished third. Freshman Noah Stevenson was the next Wildcat in the standings, finishing in eight place, and senior Sam Oxandale finished tenth.

The Kansas Relays Quadrangular is up next for the Wildcats, and the in-state rival Kansas Jayhawks will be the host of the meet. The Wildcats will be competing against host Kansas, Big 10 opponent Nebraska and Ivy League opponent Harvard. 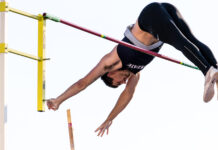