It’s been a tough season for the K-State baseball team, and those woes continued this weekend when they lost two out of three games against West Virginia University on the road.

In game one on Friday, the Wildcats jumped out to a good start, leading the Mountaineers 4-0 in the third inning, but West Virginia would get the last laugh in this one.

The Mountaineers scored five runs in the seventh and eighth innings combined and won the game 8-5 in the first game of three.

K-State junior outfielder Drew Mount had two RBIs and scored a run in the losing effort.

Wildcat starting pitcher Justin Heskett gave up 10 hits in five innings pitched, all of which were singles.

The second game of the series was not a good one for K-State, who fell 6-0 to West Virginia on Saturday.

The Mountaineers scored all six of their runs in the third and fourth inning, but K-State kept them off the scoreboard throughout the rest.

In every single inning, K-State had a baserunner, but was never able to advance them past second base. Junior Rainer Ausmus had two of the four hits for K-State.

The starting pitcher for the Wildcats was freshman Caleb Littlejim, who went three innings and gave up five earned runs in the loss.

For West Virginia, Kade Strowd got the win and is now 4-3 on the season.

This was the fifth time K-State has been shut out this season, and they struck out nine times in the loss.

In the final game of the series, K-State won by a score of 7-4 to leave the East Coast with one win out of three.

The Sunday game was tied at one before the Wildcats scored two runs to lead 3-1 in the fifth inning. K-State extended that lead to 7-1 going into the bottom of the eighth before West Virginia tried to come back. It wasn’t enough, and the Wildcats won by three.

K-State’s starting pitcher, sophomore Will Brennan, went five innings and only gave up one earned run, and the bullpen did their job in the win for K-State.

Senior right fielder Hanz Harker had three runs batted in as K-State is now 17-23 on the season and 3-12 in conference play.

Next up for K-State is a game against the University of Nebraska Omaha on Wednesday night with first pitch set for 6:30 p.m in Omaha. 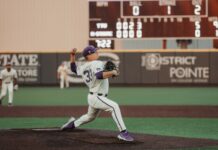 Nate’s Notes: Baseball’s toughest stretch is behind the team 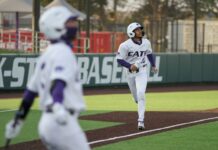 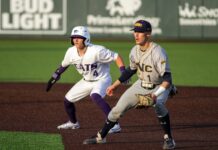