The Kansas State baseball team lost all three games this weekend against Baylor in a 3-0 shutout.

The Wildcats did not score a single run in the series opener on Friday, suffering an 18-0 loss to the Bears. Baylor had 24 hits and led 9-0 in just the third inning.

“Once a team gets going, hitting can be very contagious,” head coach Brad Hill said to K-State Sports after the loss. “Once they go on a roll, everyone else rises up to that level, and it’s tough.”

K-State starting pitcher Justin Heskett took the loss for the Wildcats, and the team gave up five home runs. This was the fifth time this year that K-State had been shut out and the third time in Big 12 Conference play.

In game two, the Wildcats managed to get on the board three times, but the pitching struggled and gave up 16 runs, leading to a 16-3 final score.

Hudson Treu was handed the loss for the Wildcats and is now 1-1 this season. The Wildcats went just 2-10 with runners in scoring position while the Bears were 7-14. K-State senior Kyle Barfield had two runs batted in for the Wildcats.

In the final game of the series, K-State fell 8-5, completing the sweep for Baylor.

K-State kept pace with Baylor for the first five innings, but the Bears scored three runs in the sixth inning. The Wildcats couldn’t make the comeback in the three-run loss.

Next up for K-State is a home baseball game against Wichita State on Wednesday night at 6:30 p.m. in Tointon Family Stadium. 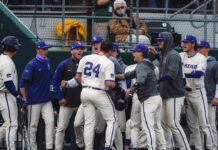