When it comes to sports I tend to consider myself a traditionalist because I don’t like to see things changed very often.

I had this same feeling a few years ago when the National Football League announced it would be moving the draft to various locations where the games are played. I don’t watch every minute of the draft, and I don’t know how many people do, but at first I thought this was a bad idea.

Since then, I have changed my mind.

Watching the excitement and the festivities that have gone on at Philadelphia and Dallas these past two years has actually brought something to the draft that didn’t seem like it was there before.

The Dallas Cowboys fans cheering or booing when they had a player called was actually kind of fun and gave me a reason to watch the later rounds.

It was really nice this past weekend in Dallas, which made it that much better to watch as fans packed AT&T Stadium to see the next superstars join the NFL.

The next question is where the NFL draft will be in the coming years. They have yet to announce where it will be, but they have narrowed down the finalists for the 2019 and 2020 years, and it should be announced sometime this month.

I would try my best to go to the NFL Draft if Kansas City was to host one of those two years. I certainly wouldn’t travel far to see it, but if it is in Kansas City, it would be hard to pass up the opportunity to see an event as big as the NFL Draft right down the street.

Pringle declares for the NFL Draft 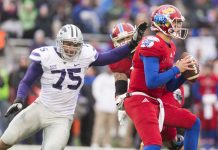