Bruce Weber and Kansas State Athletics have agreed to a two-year contract extension through the 2022-2023 season. The 2017-2018 season for K-State men’s basketball was one for the record books with 25 wins and a trip to the NCAA tournament. The Wildcats reached the NCAA Elite Eight for the first time in eight years by beating Kentucky without arguably their best player, Dean Wade. Weber will receive $2.5 million this season with a $100,000 increase each year to finish out his contract. The 24th head coach in program history has led K-State to a 125-80 overall record and four trips to the NCAA tournament.

Men’s basketball guard Barry Brown Jr. will return to K-State for his senior season as he has decided to withdraw his name from the 2018 NBA Draft. Brown had his best collegiate season to go along with the team’s Elite Eight run in the tournament. He averaged 15.9 points with a 44.8 shooting percentage. Brown led the team in double-digit scoring games and was the first player for K-State to finish with 500 points, 100 rebounds, 100 assists and 50 steals during one season.

Fifteen athletes will represent K-State at the NCAA Outdoor Track and Field Championships in Eugene, Oregon, from June 6 to 9. This is the second consecutive season that the Wildcats have had 15 athletes compete. Junior Brett Neelly will make his third appearance in the men’s shot put. K-State was one of two teams in the West Preliminary to qualify two athletes for this meet. Fans can watch the action on ESPN. 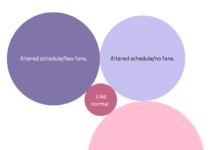