The military offers a structured lifestyle for soldiers that often sticks with them even after becoming veterans. For some, the transition between military and civilian life is rocky. For others, habits learned in the military enhance their lives as veterans.

“I think a lot of [veterans] struggle in the real world, especially when you have to get an entry-level job after given so much responsibility in the military,” said Justin Colby, sophomore in open option, while in the Office of Veterans Affairs on Monday.

On the top floor of the K-State Student Union, there is the Office of Veterans Affairs where veterans can find assistance in “utilizing their VA educational benefit,” which is a sum of money that helps pay for classes and housing while the vet follows their education.

The Office of Veteran Affairs houses opportunities for those affiliated with military life or those questioning a potential career in service. This area also doubles as a place for veterans to study and be accommodated alongside similar individuals.

In the office, Colby talked about a small bit of his time serving as a medical technician in the Army. Colby compared his medical training to a civilian occupation: “To the civilian world, I would say our skills are up to EMT [or] Paramedic.”

Colby reached the rank of sergeant while serving but ultimately decided to leave the military and pursue an education.

Colby said the Office of Veterans Affairs is not exclusive to just vets. He said it also is a place where individuals can speak to veterans about experiences, and seek advice.

After pondering about military life, Colby said it offers a very structured environment, and it has helped him learn different skills to use in the civilian world.

“I had a lot of fun,” Colby said. “I don’t regret a thing, especially the friends I made, the abilities I got — I learned networking is very important, so you’re taught very quick.”

He said the people he met while serving experienced the structured environment differently, and having the Office of Veterans Affairs gives him and his fellow vets a place to transition into civilian life.

Colby also said individuals do not need to enlist in the military to live the structured life it offers; talking to people, creating networks and learning from others experiences are all ways to learn how to live a structured life.

At Kansas State, students affiliated with the military represent 12-14 percent of the student body, according to Non-Traditional & Veteran Student Services. 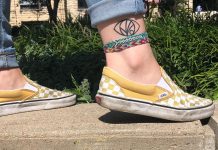 Minute in My Shoes: Exposure to new environments developed student’s outlook, but she was born to be a Wildcat

Life after service: Back to a civilian lifestyle