The Kansas Board of Regents approved and accepted Kansas State’s request for a 1.1 percent tuition increase, the lowest the university has requested since before 1989, during the last meeting of fiscal year 2018 on Wednesday.

Under the newly approved tuition rates, resident students will pay an average of $53.10 more for tuition in the next two semesters while non-residents will see a jump of about $130.05 per semester.

The proposal submitted to the Board estimates the increase will generate more than $2 million in tuition revenue.

K-State administration was able to propose such a relatively small increase due in part to the restoration of $11 million in funding from the state as well as a $15 million reduction in the university’s general use budget.

The Board’s approval of the tuition and fee proposal also grants K-State permission to expand the tuition assistance program offered to university employees to staff members of the Board.

Twitter Poll: Students, what do you think about the $70 per credit hour online course fee? 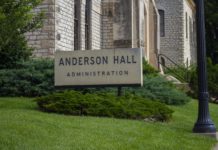