If you blinked, you might have missed MidFest. The young, “all-genre” Manhattan music festival, which this year occupied three stages in Bluemont Hotel and boasted two official after parties with bands in Aggieville restaurants, offered continuous music almost all day Saturday.

Despite coinciding with Kicker Country Stampede, MidFest was able to draw in crowds after almost doubling its lineup size from last year despite undergoing a name change.

In its third year, MidFest featured 40 acts in total, building off of last year’s success in the Bluemont Hotel venue.

After purchasing a wristband for $20, which was good for come-and-go access to the stages, MidFest attendees could hear something most music festivals can’t offer: variety. With the first stage starting at 11:45 Saturday morning, the three stages featured interchanging talent throughout the evening with sets ranging from 30 minutes to an hour.

“People think Kansas and they think country,” co-producer Katie Smith said. “They think Country Stampede in Manhattan, but that’s really not who we are. We are really way more talented and way more diverse than that. This is the local response to that.”

MidFest showcased local and regional acts in genres that included rock, hip-hop, electric, bluegrass and jazz. Those just scratch the surface, however, as many of the acts did not fit a single category, embodied by such bands as the Grateful Dudes, who describe themselves as “folk and roll,” and Space Station Lounge, who showed off their psychedelic rock and folk sound at Auntie Mae’s Parlor.

Timmy Roberts, bass player of Wakim Jazz Trio, said he appreciates how MidFest is “fitting to all genres and to all types of music lovers.” After performing first with KidzRock on the Ground Floor Stage as a director of the youth rock group from Miss Emily’s Piano Lessons, he took the stage with the jazz trio.

“[The variety] makes it really relevant for all people because we all love different types of music,” Roberts said. “We all connect to it. Especially being able to do the KidzRock thing was really cool for me, just giving these kids a chance to get on the stage and rock out with a bunch of people.”

The MidFest co-producers said the event has not suffered after this year’s name change and “rebranding” that extended to redoing its logos and changing its social media.

That effort was a preemptive decision by in order to avoid a potential legal battle with the music festival South by Southwest. The heavily inspired “Mid by Midwest” name changed to something simpler but that still sounds similar.

Smith said the email from South by Southwest that prompted the name change was “encouraging” because it showed they were “able to create so much energy that we kind of became a threat to them.”

“It wasn’t a cease and desist; it was more of a ‘Hey, we would prefer it if you change your name,’” Taylor McFall, another MidFest co-producer, said. “We figured … we might end up having to get a lawyer or something, and we decided to focus on making as good of an event as we can rather than try to fight some legal battle over a name.”

McFall said MidFest saw mostly new acts this year, though there was “some overlap.”

“We had plenty of new bands this year we didn’t have last year, like Deliberate Kin that’s about to go on,” McFall said. ”Vigilant Thieves from Kansas City are going to be on the main stage later. MariaElena, which is from Wichita. Ether from Dodge City and several others.”

It’s a stark difference from the first festival that Smith said she held in her backyard two years ago, which had only 12 bands and “maybe 100 people and a port-o-potty.” She said the size of the festival last year, which featured 24 bands, drew the real attention from sponsors. She, along with the production team, has expanded the one-day festival again this year to offer more and more Kansas talent.

Some of that success is due to a time chosen to coincide with a national Manhattan spectacle.

Smith said MidFest is a comfortable alternative that is the“opposite” of Country Stampede. The three-day country music festival “draws in national acts, people from all over come here,” Smith said. “We just wanted to highlight the talent that’s here. So local bands, local people celebrating the community just internal.”

Since “historically, people have just left town this weekend,” McFall said, the co-producers designed MidFest to be, in essence, “a reason for [Manhattanites] to stick around” with more variety and indoor amenities.

“We are an indoor festival, which means air conditioning, which means indoor bathrooms,” McFall said. “We are not outright trying to go against them, but we are an alternative … something else to do on the weekend.” 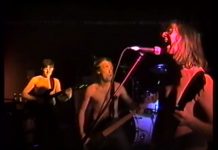 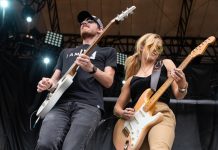