Democrats hoping for a spot on the midterm election’s ballot gathered at the Bluemont Hotel as part of Blue Wave, a fundraising event Saturday for the Riley County Democrats on Saturday.

After guests grabbed catered food and browsed the silent auction tables, candidates running for local, state and federal offices spoke to guests in effort to secure their votes in the Aug. 7 primary elections.

The first to speak was gubernatorial candidate Jack Bergeson, who states on his website that he “may be too young to vote,” but is “not too young to see the problems in Kansas.”

Gubernatorial candidate Joshua Svaty, whose running mate Katrina Lewison is a Manhattan resident, said he is living proof that young people can engage in politics and make a difference, citing the time he spent as a state representative.

“I’m running for governor because I care about the state deeply, but part of that was built from when I served as a state legislator, which I started when I was 22,” Svaty said. “I actually ran right out of college, and in fact I did my first campaign interview from my college dorm room. I have a real heart for young people getting engaged with politics. I believe in it.”

Current state senator Laura Kelly said one inspiration for her to run for governor was the “dismantling” of Kansas’ public school system.

“When we moved here 32 years ago, we came here a lot because of the public schools,” Kelly said. “My daughters got a great education because the schools were good, teachers were good, and I just want to make sure that every kid has that same opportunity, and they don’t have that right now.

“When we look at issues very specific to [college students], clearly we have seen a direct correlation between the rise in tuition and the decrease in the state general fund assistance to our universities, and that’s something that needs to be reversed,” Kelly continued.

What a court ruling on voter rights means for Kansas

Chris Morrow represented his running mate for governor, Carl Brewer, former mayor of Wichita. If Brewer wins the primary, Morrow said, he will be the first African American to run on a major ticket for state governor.

One candidate for secretary of state, Brian McClendon, was represented by Scott Allegrucci at Saturday’s event. Allegrucci said McClendon has previously worked at Google Earth and made a location in Lawrence the center of Google Earth globe.

The only candidate running for federal office, Alan LaPolice, spoke on his campaign to represent the 1st District of Kansas in the U.S. House of Representatives. He is uncontested in the Democratic race, but will run against the current representative in that seat, Republican Roger Marshall.

State representative candidates rounded out the speeches. Incumbent representative Sydney Carlin is running for re-election in the 66th District. Alex Van Dyke, a 2015 Kansas State graduate with a master’s degree in mechanical engineering, is challenging Republican Tom Phillips to represent the 67th District.

Phillips has “had his shot,” Van Dyke said.

“I am the first person to run against him since 2012, and he has not proven to be voting for Kansas in the past few sessions,” Van Dyke said. “He is voting for a future that the further right GOP has wanted, and that doesn’t represent the majority of Kansas, I believe.”

Van Dyke said one of the reasons he decided to run for office was his newborn daughter.

“I want Kansas to be somewhere she can call home and be proud to call home,” Van Dyke said.

Save the dates: primary and general elections

Q&A: Rep. Carlin discusses being a Democrat in Kansas, importance of education

Nathan King, junior in mass communications and assistant marketing manager for the Royal Purple, is an intern for Kelly’s gubernatorial campaign. King said he was introduced to Kelly and her campaign when he interned for Sydney Carlin, the state representative for Manhattan, last fall.

“I was just kind of hearing how she spoke and how she carried herself, especially being a woman senator in Kansas,” King said. “I really felt like that was something I could get on board with, and after talking with her campaign manager and seeing her staff, I really understood that this, just kind of echoing the [Topeka] Capital-Journal newspaper, this is our candidate who can beat [Kris] Kobach.”

King said K-State students who are not registered to vote need to register.

“That is so crucial in this election,” King said. “It’s all great to have a stance, but it is really kind of empty if you can’t show your views through voting. I think another thing is that you need to stay educated by looking at the newspaper, trying to find unbiased ways to get your news.”

Kansas’ next general election is Nov. 6. The primary election will occur on Aug. 7, and Svaty said voters need to be registered to vote as a Democrat to vote in the Democratic primary, but unaffiliated voters have an option, too.

“It’s already too late to change over [parties],” Svaty said. “It’s a shame, it should be far easier to do. But unaffiliated [voters] can go in the day of and declare their party and vote in the primary.”

To check your voter status or register to vote in Kansas, visit Rock the Vote’s Kansas Elections and Voting Information webpage. The deadline to register before the primary is July 17. 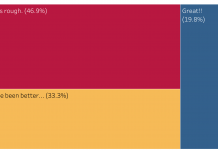 Twitter Poll: Midterm season check in — How are you feeling? 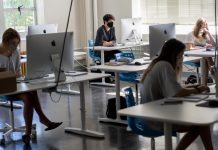