From cats and dogs to rabbits and parrots, and on one memorable occasion, alligators, the small staff at T. Russell Reitz Regional Animal Shelter works to care for the animals of Manhattan and the greater Riley and Pottawatomie county area.

This time of year is the shelter’s busy season, with wildlife abundant and kittens even more so. The city-run operation serves the public as an open admission shelter, meaning that they don’t turn any animal away if it is from their jurisdiction.

“People find wildlife babies, little birds and bunnies,” shelter technician Stephanie McCall said. “Though they’re best if they’re just left alone, people bring them in. On top of this, there are cats and puppies coming in regularly, which is why we promote spaying or neutering your pet.”

For one reason or another, animals wind up at the shelter. Typically, it is because people move or they selected pets that don’t match their lifestyle.

“You have to be honest with yourself about how you live when you’re adopting a pet,” McCall said. “Often we get animals that aren’t given the time they need to adjust to a home and learn the rules or just don’t match how their previous owners lived their life.”

Animals that arrive at the shelter go through a process before they move on to their next step.

By state law, animals must be kept at the shelter for at least three days, but within Manhattan city limits, the minimum they must be kept is five days. During this time, the animal is evaluated for health issues and temperament and waits for their owner to pick them up if they have one.

If nobody comes forward to pick up the animal, the animal becomes the property of the shelter, and the shelter makes decisions on what to do with the animal. Healthy, sociable animals will be spayed or neutered and put up for adoption. If the animal has fixable issues, the shelter then contacts rescues across the United States to care for the animal and find it a home.

“Our cat placement rate runs about 75 percent. About 85 percent of dogs will be placed,” McCall said. “Placement includes pets being reclaimed, adopted or transferred to a rescue.”

According to McCall, the placement rate for cats is lower because the shelter takes in feral cats that cannot be placed.

“[Feral cats] are not pets,” McCall said. “They don’t like to be around humans. We don’t have a barn cat option for them.”

But for severe cases of illness, injury or aggression, the animal will be euthanized.

“We try to fight the dark dungeon image,” McCall said. “I can understand that image, but we do our best to help the animals we can but some are beyond help.”

The decision to euthanize an animal is not one that is done lightly, and the animal often stays between two to three weeks before the decision is reached.

“The last thing I want is for an animal to suffer, so we can do the kind thing and help them move on,” McCall said. “We see animals that have been neglected and starved for so long that they would have a very hard time recovering. At that point we want to act in the best interest of the animal, we want to think about if the animal will have a good life when they leave the shelter.”

Some animals are unadoptable because they are extremely aggressive and pose a danger to other animals and the people who care for it.

“Many animals come to the shelter because of behavior issues, mostly because they’re untrained and never taught how to properly interact with humans,” McCall said. “It is almost never the animal’s fault. It is always the humans that failed them. Our duty is to the public safety and health of our community.”

For the shelter staff, it is difficult to part with the animals they’ve cared for.

“Nobody likes it,” McCall said. “For us, it’s hard. We’ve cared for these animals for about two or three weeks before a decision is made. It’s not easy to cope with situations that we cannot change for these animals.

“Private groups and no-kill shelters are great,” McCall continued. “But our numbers then increase because they get full and can’t take anyone on. Some of those shelters cannot take on any animals that have shown signs of aggression because their liability insurance will not allow them.”

Despite the difficulties of her job, McCall, who started working at the shelter as a volunteer in 2004 and has held a paid position since 2005, said she finds joy in her work.

“I’m a caretaker, and I love helping the public find a family member,” McCall said. “When they do find a pet at the shelter, it is an amazing feeling.”

According to McCall, one woman even crossed the country in a private jet to adopt a dog at the shelter. Stories like that make the job worthwhile.

“It never gets old here; it always changes,” McCall said. “We have all kinds of little stories. We’ve dealt with alligators and goats at large that broke into someone’s home and destroyed it. We also managed to get 26 exotic birds seized from one home placed across the country.”

Something new awaits McCall every single day, and that is what she said makes her job special to her.

“We have sad stories and super happy stories,” McCall said. “But I really enjoy this job, because I get to see so much joy. I learn a lot from the animals every day. Maybe it’s a calling. I get to be the voice that they don’t have.” 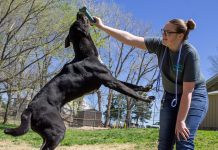 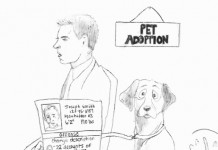