City commissioners are considering an increase of the pet licensing fee. After backing off a plan to require veterinarians to report unlicensed pets to city officials, commissioners have focused in on a new proposal that would create fines for owners of unlicensed cats and dogs over four months in age, the Manhattan Mercury reports. Licenses for unsterilized pets would be approximately doubled due to “issues more associated with those animals.” Another change would have the pet’s rabies tag used as their license number, since the shot is required for the pet to be licensed.

The mural honoring Brown vs. Board Historic Site in Topeka inches closer to its finishing touches. WIBW reports that ArtsConnect, the organization that created the 22-foot-wide painting, invited community members to participate in its creation. Controversy struck the project in June when an artist painted an immigrant mother clinging to her child, but the image was painted over by ArtsConnect, saying it didn’t represent the site’s historic message. 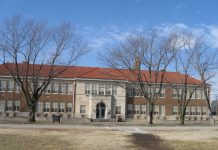