On May 22, a fire started on Hale Library’s roof, resulting in fire, smoke and water damage throughout the building. This fall, Hale will not be open as it undergoes cleaning and restoration. The 220 public computers, 1,600 seats and millions of print materials will not be available to Kansas State students and faculty until December 2019, when Hale is expected to be open to the public again. Until then, K-Staters will have to find alternatives for book rental, study spaces and public computer access.

Fire crews responded to a roof fire at Hale Library around 4 p.m. on May 22. K-State Alerts notified students later that afternoon, stating the building had been evacuated and people should stay clear of the area. The Manhattan Mercury and other news sources later reported the accidental fire was caused by roofing work.

Hale Library update: The library remains closed until further notice after yesterday's fire. The cause of the fire is under investigation, K-State says. Many of the university's IT-related services like KSIS are currently unavailable.

The area that sustained the most damage was the Historic Farrell Library in the northwest section of the building, which was originally built in 1927, said Lori Goetsch, dean of Hale Library, on June 4. That northwest corner of the building also includes the Great Room on the third floor, the Information Technology Center and Media Development Center.

The actual fire damage was contained to the roof, but the rest of Hale’s 500,000 square feet of space was impacted by smoke and water damage. Goetsch said about 400,000 gallons of water were pumped into Hale Library to quench the flames.

Michael Haddock, associate dean for research, education and engagement at Hale Library, said on June 25 that Hale rests on a slight slope toward Mid-Campus Drive, so that is how the water traveled from the northwest corner of the building to the eastern sections.

Over the summer, Belfor Property Restoration had 200 staff on site to remove wet ceiling tiles and drywall, remove furniture from the building and transport books to facilities near Manhattan Regional Airport and Fort Worth, Texas, for cleaning and restoration. Haddock said on July 23 that, at that time, 60,000 boxes of wet and dry materials had been removed from Hale Library.

First floor renovations were scheduled to be done over the summer, but now those improvements will be rolled into an overall plan for restoring Hale Library.

Haddock said on July 23 that, in the week prior, library staff started meeting with PVAG Architects to assess the building’s condition and start plans for renovation.

There are also historical preservation specialists and art restorers on site who are attempting to preserve the library’s murals, Haddock said.

“We are seeing some damage on the murals,” Haddock said. “The wall behind is plaster, and so they’ve got to dry it out really slow with the right humidity, which they’ve been trying to do. We hope no pieces of the wall have fallen off or anything yet. We have them working in there on the murals, trying to save them.”

At the time of the fire, other K-State services were disrupted, most noticeably the university’s IT Services, which were housed in Hale. For several days, campus internet and some university websites were inaccessible. According to K-State’s Hale Library Recovery Plan webpage, 95 percent of IT systems and services are now available.

Electrical power was restored to the Data Center in Hale on June 18, according to that same webpage. Now, the IT Help Desk and other IT services are located in Cats’ Den on the second floor of the K-State Student Union.

Haddock said on July 23 that the target date for Hale to reopen will be December 2019, but he also said the first floor might be done by August 2019. At this time, the cost of repair and restoration has not been determined.

K-State students, faculty and staff can still access K-State Libraries’ online resources. Haddock said those materials were not affected by the fire because they are digital, and K-State has access to 90,000 electronic journals.

The 800 editions of print-only periodicals that K-State receives, Haddock said, will be available in the Math/Physics Library in Cardwell Hall.

It was all hands on deck last Monday as #KState Libraries assembled 1,700 boxes for our current periodicals collection, which was previously shelved on Hale Library's 1st floor.

They're now at home in Cardwell Hall's Math/Physics Library. Stop by to relax, peruse and read! pic.twitter.com/O7QMXlosz7

The library’s help desk is now located at the information desk in the Student Union on the first floor of the building. There, Haddock said, students can get help with interlibrary loan, class reserves pick-up and more.

“The main thing with interlibrary loan is we can get it — we can get stuff fairly quickly for people — but you can’t come in the night before the assignment’s due,” Haddock said.

IT Services are also located in the Union in Cats’ Den on the second floor. The Media Development Center, is located in Seaton 1.

Resources that Hale provided like public computers, printing and study spaces can be found at other locations across campus. On-campus computing labs can be found in the Union, Seaton Hall, Dickens Hall and the Business Administration Building. Print stations exist at each of these locations, and color printing is available in Weigel Library.

According to the Aug. 8 K-State Today announcement, students will have $20 for printing in the fall semester.

The art of the on-campus nap

Haddock said in July that Goetsch and Rebecca Gould, director of the Information Technology Assistance Center, are putting together a list of places to study on campus for students to use. Now, that list of study spaces can be found at k-state.edu/maps.

Haddock said, however, the problem is none of the spaces are very big.

“It at least gives students a choice, and they’re figuring out where they’ll have print stations in some of them,” Haddock said.

A fund to support Hale Library’s restoration called “Help for Hale” can be found on the KSU Foundation’s website. K-State Libraries is also documenting the journey of Hale and its staff through blog posts on K-State’s website. 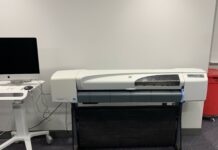