Home Other Sports What to Watch What to watch: Week 1

After a long wait, college football finally makes its return. The first week should be full of excitement with four top-25 matchups and one top-10 matchup.

No. 6 University of Washington vs. No. 9 Auburn University

Although it is just the first week of college football season, this game could end up being a determining factor in whether these teams will play in the College Football Playoff.

Both teams are lead by Heisman Trophy candidate quarterbacks—Jake Browning for Washington, and Jarrett Stidham for Auburn.

Washington and Auburn will play at Mercedes-Benz Stadium in Atlanta. Kickoff is Saturday at 2:30 p.m. on ABC.

It doesn’t get much better than two highly ranked, big-time college football powerhouses playing each other the first week.

Shea Patterson will make his first start for Michigan at quarterback. Patterson joined the Wolverines after transferring from the University of Mississippi. He threw for 2,259 yards and 17 touchdowns last year.

Jim Harbaugh, who is still trying to get the Wolverines back to elite status, has a chance to get this season started with a big win on the road against a program like Notre Dame.

The last time the Fighting Irish started a season with high expectations, Texas upset them in their 2016 season opener. The team spent the rest of the season fighting to get back on track.

Notre Dame has a chance to start off strong this year and make it to the College Football Playoff.

Notre Dame and Michigan is one of the greatest college football rivalries of all-time. The two teams are playing for the first time since Notre Dame shutout Michigan, 31-0 in 2014.

The rivalry will be reignited Saturday at 6:30 p.m. on NBC.

No. 20 Virginia Tech University at No. 19 Florida State University

Sophomore James Blackman and junior Deondre Francois will battle it out for the position of the Seminoles’s starting quarterback. Last year, Blackman stepped up the position after Francois suffered an injury in the team’s season opener.

With former Florida State head coach Jimbo Fisher’s departure to Texas A&M in the offseason, Willie Taggart is now in place to continue the winning tradition Fisher started. Taggart has an opportunity to prove he can win at a powerhouse program against a good Virginia Tech team.

The Seminoles are the favorite to win in this closely ranked matchup.

This Hokies and the Seminoles will play at Doak Campbell Stadium in Tallahassee, Florida. Kickoff is scheduled for Monday at 7 p.m. on ESPN. 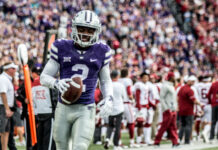 Wildcats in the NFL: Week 1 edition