Home Sports COLUMN: Zumach leads off as Collegian Athlete of the Week

This year, I am trying a new column at the Kansas State Collegian. The column will highlight one female and one male athlete over their performances the past week. It will provide a way for students to learn about standout athletes at K-State and how they excel in their sports.

This first week will be a little different, however, due to the fact that there has not been a male sport that has started competing.

This week’s female athlete of the week is K-State volleyball’s outside hitter Kylee Zumach. She had a great start to her final campaign as a Wildcat this past weekend during the Wildcat’s sweep of Hawaii.

The entire weekend was a bit different for the team as they were supposed to play three matches in three days against Hawaii, UCLA and Gonzaga, but after Hurricane Lane swept through the area, the Wildcats only played the Rainbow Warriors in two matches.

In just six total sets, Zumach has 37 kills already, which is twice as many as anyone else on the team. She was also very accurate in her swings, hitting .330 and leads her team in that category as well.

On the defensive side, Zumach is second on the team in digs per set at 3.33 and totaled four blocks in the two matches against the Rainbow Warriors.

Zumach helped lead the Wildcats to their first ever sweep of Hawaii and start the season 2-0.

Zumach was named Big 12 Freshman of the Year in 2014, and she has been named to the Big 12 first and second teams and the Big 12 honor roll — and the accolades have only stacked up from there.

The senior outside hitter also received Big 12 Offensive Player of the Week honors for her opening-weekend performance.

Zumach and the Wildcats will travel this weekend to Saint Louis, Missouri, for the Marcia E. Hamilton Classic. They will take on Marquette at 3:30 p.m. Friday, Saint Louis on Saturday at noon and Western Kentucky at 5 p.m. Saturday. All of the games will be live on KMAN. 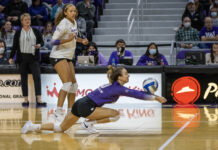