No. 18 Mississippi State goes into Manhattan after dominating Stephen F. Austin 63-6, and Kanas State avoided getting upset by South Dakota with a late comeback to win 27-24 in week one. The Bulldogs will get their starting quarterback Nick Fitzgerald back after he was suspended for game one for a violation of team rules.

The Wildcats will hope for more out of their offense after a very poor performance against South Dakota. That may be tough against a Mississippi State defense that recorded 17 tackles for a loss against Stephen F. Austin.

The Bulldogs might have their hands full against wide receiver Isaiah Zuber who had a breakout game in week one, with five receptions or 81 yards including two total touchdowns. Kansas State’s quarterback battle between Skylar Thompson and Alex Delton continues, and both might have a chance to win the job with a big performance this week against Mississippi State.

The good news for the Wildcats is that head coach Bill Snyder says his team is still capable of a strong season after a poor season opener as in 2011 and 2014. This has the potential to be a fun, close Big 12 versus SEC battle.

This game will kickoff at 11 a.m. Saturday on ESPN.

The No. 2 Clemson Tigers will be going into Kyle Field – one of the toughest places to play in college football – and should make for a fun matchup. Both teams are coming off dominating performances in week one. The Aggies defeated Northwestern State 59-7, and the Tigers defeated Furman University 48-7.

Clemson will be looking to take care of business handily to show they are elite this year, as they want to be seen as the team that is capable of knocking off Alabama. This is a chance for Texas A&M, coached by Jimbo Fisher, to take the game down to the wire or pull off the upset to take one step closer to becoming a powerhouse in college football.

This game will kickoff at 6 p.m. Saturday on ESPN.

No. 15 The University of Southern California vs No. 13 Stanford University

No. 15 USC against No. 13 Stanford – the game of the week – is the only top 25 ranked matchup of week 2. Both teams come into this game with a 1-0 record as they took care of business in their season opener.

For the Trojans, true freshman quarterback JT Daniels played a great game in week one as he threw for 282 yards and one touchdown against UNLV. We will see what Daniels is truly made of going up against No. 13 Stanford.

For the Cardinals, Heisman trophy runner-up running back Bryce Love didn’t have a good game against San Diego State as he only rushed for 29 yards on 18 carries. Fortunately for Love, he has the chance to redeem himself on Saturday in the game of the week against Stanford to show that he is still worthy of being in the Heisman trophy race. 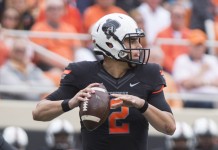 A shift of power happening in college sports