On Saturday, Kansas State football plays its final non-conference football game of the season as the University of Texas at San Antonio Roadrunners come to Manhattan.

Saturday will be just the second time that K-State and UTSA have played each other. The only other meeting came in 2015, when the Wildcats came out on top with a 30-3 win.

UTSA is 0-2 through its first two games this season. The Roadrunners were dominated by Arizona State University 49-7 in week one and fell 37-20 against Baylor last Saturday.

The Roadrunner offense has only amounted 475 total yards of offense this season. 100 of those yards are via the running game, while 375 yards come from the passing game. They have scored an average of just 13.5 points per game through two games.

Junior quarterback Cordale Grundy has been the leader of the offense. He has completed 34-of-66 passes, good for 51.5 percent, throwing one touchdown and two interceptions.

Sophomore running back B.J. Daniels has been the highlight of the offense, running for 114 yards on 25 carries while scoring two touchdowns on the ground.

It is no secret to anyone who has watched K-State play this season that the Wildcats have been underwhelming on offense.

Not only have yards been hard to come by, points have been even more far-and-few. After two games, the Wildcats only have two offensive touchdowns. The only other touchdown the team has scored was on a punt-return touchdown against South Dakota.

Against UTSA, K-State could have an opportunity to tune up its offense before Big 12 play begins next weekend.

Defensively, UTSA has already given up just under 1,000 yards, as they have surrendered 997 yards to opponents thus far. Arizona State and Baylor combined to average 7.6 yards per play against the UTSA defense.

On paper, the Roadrunners are worse at defending the pass than the run. They have given up an average of 178.5 rushing yards per game and 320 passing yards per game so far. In terms of scoring, UTSA has allowed three touchdowns on the ground and seven through the air.

At the helm: UTSA

Frank Wilson is in his third season as the head coach of the Roadrunners. Through two full seasons and two games this year, he has an overall record of 12-14.

UTSA has only had a football program since 2011, and has played at the Division I Football Bowl Subdivision level since 2012.

The Roadrunners went 8-4 and 7-5 in the first two years of Division I play. The next two years before Wilson’s arrival, UTSA went a combined 7-17.

Wilson’s first season was in 2016, and in that season, he led UTSA to its first-ever bowl game appearance—the Gildan New Mexico Bowl—which ended in a 23-20 loss to the University of New Mexico.

In 2017, Wilson led UTSA to its first win over a Power Five conference in a 17-10 victory over Baylor.

Before arriving in San Antonio, Wilson spent six years at Louisiana State University. During that time, he was the running back coach and recruiting coordinator, and was associate head coach for the final four years.

In total, Wilson has 10 years of coaching experience in the Southeastern Conference. From 2005-2007, he was the running backs and assistant special teams coach for the University of Mississippi, also known as Ole Miss. Wilson spent the 2009 season as the wide receivers coach at the University of Tennessee.

Quarterback battle rages on for K-State

It seems like a broken record, but almost everyone is probably wondering the same thing: Will either Skylar Thompson or Alex Delton run away with sole possession of the starting quarterback spot, or will both play for the whole season?

Through two games, both Thompson and Delton have played, while Thompson has played more snaps.

At Tuesday’s press conference, head coach Bill Snyder said that Thompson would get the start on Saturday.

Thompson has completed 15-of-31 passes for 147 yards, two touchdowns and one interception. Thompson has also chipped in 92 rushing yards.

Delton has gone seven-for-18 with 105 yards and two interceptions. On the ground, Delton has gained 82 yards.

Thompson also has appeared to be more poised in the pocket than Delton, and made a great throw to junior wide receiver Dalton Schoen for K-State’s lone touchdown in last weekend’s loss to Mississippi State.

The Wildcats and Roadrunners will square off at 3 p.m. Saturday in Bill Snyder Family Stadium. The game will be televised on FSN and can be streamed through Fox Sports Go. 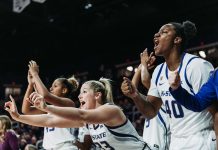 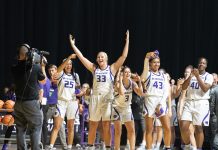 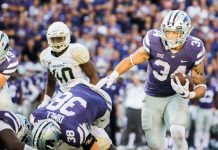 Snyder silent on quarterback situation as Wildcats head to Baylor