This week’s Collegian Athletes of the Week features two first-time appearances and a representative from a new sport.

Entz scored one goal and had one assist Sunday in a 3-0 win over the University of Tulsa. She had a total of four shots in the match and her goal was the second of the season for the Wildcats and her seventh in her young career.

After the win on Sunday, Entz spoke to K-State Sports about improving in the long ball as opponents have been playing tighter on defense, saying “that has left me wide open on the side, hanging out.”

Her goal on Sunday was the result of a long assist from senior defender Megan Kalkofen.

The men’s athlete of the week goes to the quarterback of the Kansas State football team, Skylar Thompson. Thompson was outstanding on Saturday in a 41-17 win over the UTSA Roadrunners at Bill Snyder Family Stadium.

Thompson had a total of 213 yards in the air, completing 13 of 18 passes while throwing for two touchdowns in the rout of the Roadrunners. He also had completions to seven different receivers.

The redshirt sophomore rushed for 66 yards, including a 27-yard touchdown run in the third quarter.

After the game, head coach Bill Snyder voiced his pleasure with Thompson’s performance on Saturday.

“Two of Skylar’s touchdown passes were excellent throws, threading the needle,” Snyder told the media. “I was pleased.”

Thompson echoed satisfaction with the performance of the whole team.

“Coming into this game we really wanted to build momentum going into Big 12 play and really wanted to put emphasis on starting the game well — getting into the end zone and getting the offense rolling.” Thompson said after the game. “I felt like we did that today.”

Thompson and Entz will have another chance to continue recent individual and team success as both of their teams begin competition against Big 12 opponents this week.

The K-State soccer team hosts the Oklahoma State Cowgirls at 7 p.m. Friday at the K-State Soccer Complex. The match can be seen on ESPN3 or listened to on 101.5 KROCK. On Saturday, the football team will travel to Morgantown, West Virginia, to take on the West Virginia Mountaineers at 2:30 p.m. The game will be televised on ESPN.

Luke’s Locker: Adrian Martinez is the key to a potential conference title

Know Your Opponent: Texas Tech and the Wildcats in for a close game 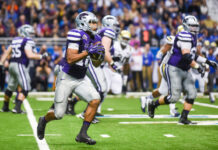 Wildcats in the NFL: Lockett has back-to-back standout games