Home Culture Feature Manhattan dining 101: The most popular places to eat in the Little...

Whether you’re new to Manhattan or are a returning student, all of us have one thing in common: our need to eat.

Here is the one stop guide to the most popular cuisine the Little Apple has to offer.

If you find yourself somehow awake before noon, head on down to Bob’s Diner. According to their menu, it was voted the No. 1 place to eat breakfast.

Larissa Ester, senior in modern languages, said every time her dad comes in town, Bob’s is where they end up.

“It’s a place to go that’s not something people would immediately think of,” Ester said. “They’re big on their breakfast food, but their burgers are good too.”

If Bob’s Diner isn’t your thing, another breakfast spot is The Chef.

Charles Limbocke opened The Chef in 1943. It was a Manhattan dining classic until it closed in 1986. Then in September 2008, Kevin and Kurstin Harris, along with Zach Filbert, reopened The Chef with a modern yet nostalgic vibe.

“When in doubt, always go for the hash browns over the homestyle potatoes,” Alissandra Stoyan, assistant professor of political science, said. “This place is always worth the long wait on the weekends.”

There are many locations to get lunch and dinner around Manhattan, but for Skyler Stern, senior in psychology and criminology, the place to go is the Keltic Star.

“The fish and chips are really good as well as the shepherd’s pie,” Stern said.

The Keltic Star opened in January 2013 with the goal of bringing Manhattan “an authentic British Public House experience.”

“Its got a cool vibe, and if you’re of age, it’s also a good place to get a Guinness or an Irish whiskey,” Stern said.

So Long Saloon opened in 2001, taking over the building that housed Pyramid Pizza and Carousel Clothing, two longtime Aggieville businesses. While it is most known for its bean dip, the eatery also famous for its resist temptation burger and its Nancy beer.

Some other notable mentions include Baan Thai, a local Thai eatery that promises “the best Thai food this side of Bangkok,” as well as the Little Apple Brewing Company.

If you’re looking for something fancy, Harry’s is an admired location.

“I only make it there for special occasions, but all the food is delicious,” Stoyan said.

If you missed dinner or find yourself “studying” at 2 a.m., a well-liked place to get some grub would be Pizza Shuttle.

“It’s not the best pizza, but they’re open late and deliver to the dorm,” Ester said.

Another prime spot is the Varsity Food Truck. It’s located behind the main Varsity Donuts building and is open from 9 p.m. to 2:30 a.m.

Stoyan said the best item on the menu is the mac ‘n’ cheese grilled cheese.

“It may sound ridiculous, but it’s so worth it,” Stoyan said.

The best way to find a new culinary experience is to go out and try it for yourself. Manhattan is abundant with food choices that will satisfy taste buds — grab a friend or two and take in all that Manhattan has to offer. 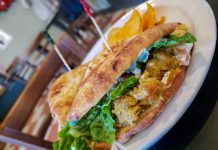 Restaurant rebirths: How businesses have adapted during COVID-19 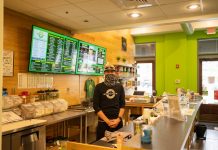