The Kansas State men’s golf team competed in the Golfweek Conference Challenge in Cedar Rapids, Iowa, on Sunday and Monday.

The tournament, hosted by the University of Iowa, took place at the Cedar Rapids Country Club.

On Sunday, senior Jeremy Gandon was the top performer for K-State. He had five birdies and two bogies in the opening round on his way to score of 2-under-par 70. He finished tied for ninth place after the first round.

Redshirt freshman Brian Choe finished the first day just one stroke behind Gandon. Choe, who was competing in his first collegiate round, had four birdies and two bogeys to finish tied for 14th place at 1-under-par 71.

Junior Ben Fernandez finished the day tied for 23rd at even-par 72, freshman Will Hopkins finished tied for 49th at 3-over-par 75 and sophomore Kyle Vance tied for 77th at 7-over-par 79. Vance suffered an injury on the fifth hole.

As a team, the Wildcats finished at an even-par 288 to stand at sixth place going into the second round on Monday.

Head coach Grant Robbins told K-State Sports on Sunday “it was an OK day” for his team.

“I didn’t think we were very sharp from a ball-striking standpoint, but the guys did a great job of staying patient and were able to grind it out to even par,” Robbins said.

The tournament continued with round two on Monday, and by the end of the day, the Wildcats had dropped four spots to finish in 10th place.

Gandon held his lead as the top Wildcat performer, finishing in a tie for 13th place with a score of 2-under-par 142.

The teams were supposed to finish out the tournament’s final round on Tuesday, but due to heavy rain and thunderstorms in the area, the final round was canceled.

K-State totaled a 7-over-par 295 in the second round, finishing 10th out of 16 schools, just one stroke behind ninth-place Furman University.

“Having to play with four guys, I thought the guys had a mindset of not to play poorly instead of playing to play great,” Robbins said to K-State Sports after Monday’s round. “We have some adversity right now with Kyle [Vance] being out, but we can’t make excuses.”

Robbins indicated that he feels his team can bounce back.

“These guys are capable of playing really good golf,” he said. “They just need to let it happen.”

Next up for the Wildcats is the Maui Jim Intercollegiate in Scottsdale, Arizona, taking place Friday through Sunday. 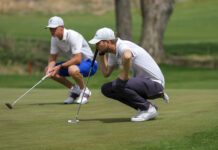 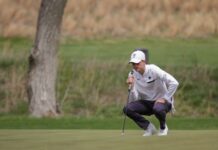 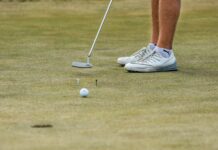