Saturday’s football game will be the second time in three years that the Wildcats will be beginning conference play on the road against the Mountaineers.

K-State has been on the road to begin Big 12 play every year since hosting Baylor in 2011.

In his weekly press conference, head coach Bill Snyder was a little perplexed with the fact that the Wildcats are always on the road to start the season.

Snyder jokingly said, “It [the scheduling] is a done by a computer so I need to talk to the computer I guess.”

Snyder also mentioned that he loves to play at home but emphasized that being able to win on the road is extremely important.

Senior offensive lineman Dalton Risner talked about the environment of Milan Puskar Stadium and what to expect from the crowd and Mountaineer team.

Crowd noise will be a factor for the offense as this will be the first road for the Wildcats this season.

During practice this week, the offense simulated crowd noise on the big screen at Bill Snyder Family Stadium.

Risner said practicing the noise factor helps the offense prepare for the environment.

“I can barely hear myself think for two and a half hours on Tuesday and Wednesday, it’s so aggravating but it’s good for us,” Risner said. “You get to the game and you think ‘Okay, I can do this.’”

K-State is seen as the underdog against West Virginia; the current line is 16 points, but the last four matchups have been decided by six points or less.

The Wildcats will be hoping to contain Heisman hopeful Will Grier and the Mountaineers on Saturday in Morgantown. 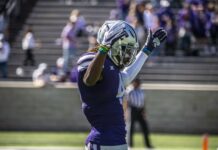 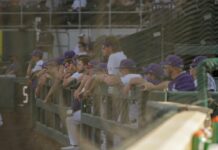